↓
Home Menu ↓
Home→BRONX BOMBERS KNOCKS IT OUT OF THE PARK. YANKEE GREATS COME BACK ON BROADWAY

Broadway’s Spring Season opens with a rousing tale of Pinstripe pandemonium at Circle In The Square that will delight die-hard, must-see baseball boosters and non-fans alike.

BRONX BOMBERS, written and directed by Eric Simonson, answers humankind’s key perennial question, who is the center of the Yankee universe? Why it’s none other than Yogi and Carmen Berra. Faced with a conundrum that imperils and threatens the storied Franchise, they call upon an assembly of Yankee Greats for help. Theater goers will be wonderfully transported into an interlocking NY netherworld to see and hear the Mick, the Sultan of Swat, the Iron Horse, Reggie, Derek Jeter and more Yank heroes hold counsel.

Produced by Fran Kirmser and Tony Ponturo, BRONX BOMBERS is their third work in a sports series for the theater. LOMBARDI, the longest-running play of the 2010-2011 Season (now being made into a major motion picture) and MAGIC/BIRD are in the record books for this powerhouse producing couple. 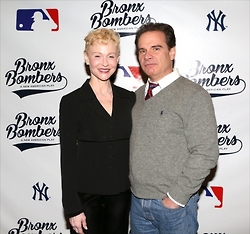 Newlywed actors Peter Scolari and Tracy Shayne keenly and smartly portray the Berras. On stage the once Scarsdale, New York denizen and Emmy Award winner, Scolari moves about like the famed Yankee coach and says Yogi-isms in such a way audiences will believe the Hall of Famer himself is trotting upon those boards. Photo by Walter McBride from the Bronxbombers Play website.

But for amazing and uncanny accuracy in acting Tracy Shayne’s performance as Carmen is simply stunning. Shayne nails Carmen’s St. Louis drawl and diction to an absolute tee. She warmly conveys Carmen’s well known devotion and protection for Mr. Malaprop. “If you can’t imitate him, don’t copy him.” Clearly, that Berraism can’t be said of either Peter Scolari or Tracy Shayne given their wholehearted and strong memorable presentations.

Another big plus, bigger than a Balentine Blast, for BRONX BOMBERS are the cast members who draw double duty as multiple characters and do it exceptionally well. 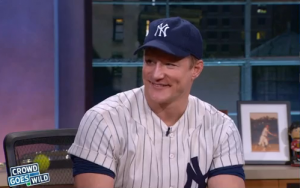 Bill Dawes, who is also a stand-up comic, here in NYC you can catch him at Gotham Comedy Club and the Stand Comedy Club, dons the #7 uni and is head and shoulders, Mickey Mantle. With a loud Hawaiian shirt and poly pants, Dawes transfixes us into believing Thurman never got on that plane.

In his Broadway debut, Chris Henry Coffey, with just a slight turn of the lip, summons for us another Mr. Coffee, Joe DiMaggio.

C.J. Wilson as Babe Ruth and John Wernke as Lou Gehrig share the spotlight in an intense scene which correctly displays the true relationship between the Home Run King and long-time first baseman. As a baseball historian, I urge to pay close attention to the dialogue and ask you to think to yourself what other reason could there be.

And for unbridled passion, Keith Nobbs brings forth the emotional and embattled Yankee skipper Billy Martin.

Prick my thumb and you’ll see I bleed for one team and one team only, Red Sox Nation, but I must be true to good entertainment and BRONX BOMBERS goes yard.

For more info catch BRONX BOMBERS on the net at: www.bronxbombersplay.com 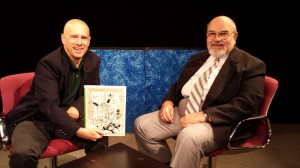 Exclusive review for WPCNR by John Vorperian, shown above left, interviewing Sportswriter Hal Bock on WPPA’s BEYOND THE GAME