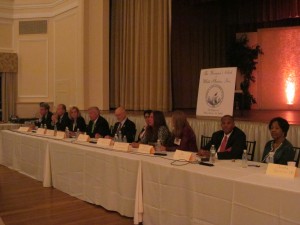 White Plains met its Candidates for the city races at the Womens Club at the CV Rich Mansion last Thursday night. Fifty persons came out. 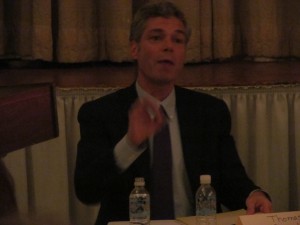 Mayor Tom Roach leading off said  he took over the city after the previous Mayor abdicated the position leaving a wound to the city.

He said he wanted to turn the city around and he thinks he has done that, pointing out his green initiatives of bring Zip Cars, electric car charging stations and bike lanes to the city, and installing and using an emergency notification dial out system during Hurrincane Sandy and the Code Red system.

Roach said the FASNY project bringing a school school campus to Ridgeway was not a “done deal.” He said the city was not the city he inherited, it is a better city he pointed to developments happening again, including development of the Sholz property, not mentioning what. 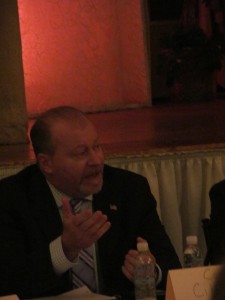 Cibelli said Roach needed to more of a communicator (with the city, with labor), which he, Cibelli  feels he has great experience doing as a New York City School Administrator.

Cibelli advocated developing the station plaza. Roach said the city had applied for a grant of $1.8 Million to study how the station plaza could be developed. He criticized the administration’s reputation that “citizens can’t get in touch with city hall.” 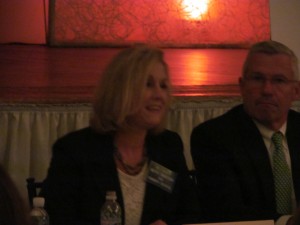 In the Council Races, Council President Beth Smayda (above) said the city had been fiscally responsible and instituted reforms, prevented borrowing for tax refunds, and blamed city financial problems on the raising pension costs. She touted restoring the city’s Bond Rating to AA-1 with no negative outlook.

Smayda defended the city decision not to buy the Ridgeway Country Club because of a study showing it could not be run profitably for the city. 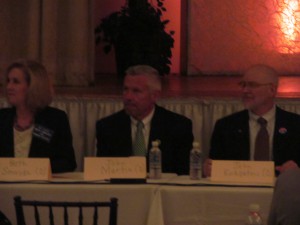 Councilman John Martin (Above, center) echoed Smayda’s financial responsibility tack and said his business experience in real estate and running his own business gave him an understanding to guide city through the financial crises He said it was time to redo the city comprehensive plan as one of his objectives if reelected.

Councilman John Kirkpatrick, (Above, right)  noted his long experience in environmental law, and commercial development as a lawyer, and said he wanted to continue the city’s transparency. Kirkpatrick also said that any FASNY Findings Statement the Council decides on in two weeks “had to be able to stand up in court.”

Smayda and Martin said they are carefully reviewing  the thousands of pages of documents and 813 public comments on the FASNY issue.

Kirkpatrick said he would work for promptly drawing up a new comprehensive plan for the growth of the city, as did Mr. Martin. 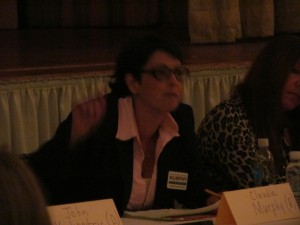 Claudia Murphy is an internationally recognized research technical photographer.  Forced to find a new career due to a disability, she is now an independent business woman who runs a pet walking business with over 500 clients. She is running on the Republican ticket with a populist theme. She said she’d walked a picket line, and spent the first part of her life in public service research.

Murphy said she was running to end one-party rule in White Plains. She opposes the FASNY project, and holds the incumbent council responsible for losing the Ridgeway open space when the city declined to buy it.

She noted that her total taxes have doubled in ten years and senior citizens in White Plains cannot afford the steady annual rate in increases in taxes. She said she did not support changing zoning in the outer neighborhoods because it sets a dangerous precedent that if the city does it for one developer, it is harder to deny similar spot zoning. She also advocated term limits.She promised if elected to be the most accountable city employee you have and announced her phone number to the audience 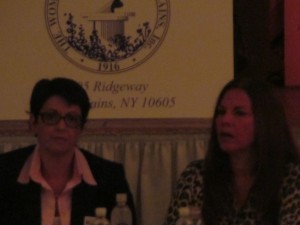 AnneMarie Encarnarcao, (Above, right) is a realtor in White Plains, running for council on the Republican ticket. She questioned the wisdom of the council when they voted not to buy the Ridgeway Country Club for $9 Million, but did decide to build the Lyons Place Garage for $17 Million.

She too made note of the doubling of taxes and would be working to hold the line on city taxes. She advocated a City version of the STAR Tax to ease the impact on persons paying increased city and school taxes each year. She suggested Payments in lieu of taxes be paid by non-profit organizations to pay for city services they take advantage of to defray the costs of providing services. Encarnarcao said she was running because “you’re (the council) not listening to us.”

In the County Legislature District 5 Race… 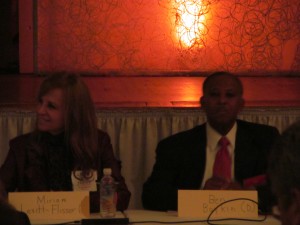 District 5 race Miriam Levitt-Flisser (Left, above) the Republican candidate, a pediatrician and former Mayor of Scarsdale, said she had dedicated her life to public service.

She advocated settling the affordable housing HUD-County controversy to recoup the Community Development Funds lost for lead paint abatement that she sees affecting children. She said she would work toward settling of the issue without draconian altering of zoning in communities targeted by the settlement with HUD.

Flisser said legislators had to put politics aside and work together.

Benjamin Boykin, (right, above),the incumbent White Plains Councilman running for the seat longtime occupant Bill Ryan is retiring from,  said he would work for quality of life in his possible term on the legislature.

He broke from the Democrat County Executive candidate, Noam Bramson on the zoning issue.  Boykin said home rule was very important and the affordable housing solutions for affected communities should not dictate zoning. And of course, he promised to keep taxes low.

Topics not even mentioned in the list of questions was the labor problems with the police currently in binding arbitration, and how challengers would develop the city or spur growth; how the city would pay for labor settlements in 2016 with very thrifty settlements with fire and CSEA expiring,  And, if revenues do not turn up in 2014 how would settlements be paid for,  and whether parking fees would be lowered to ease the shopping drain.

The lack of communication of the city to the people was raised briefly. No questions explored the very expensive legal spending of the city on the lawsuits brought on by the police labor union pension dispute they are fighting and  the police arbitration. Poor relations with the unions begun when the Democrat one party rule took over in 2010, and zeroed in on pension and health plan demands was not addressed.

No questions raised the issue of the costs to the city of fighting extended FASNY-related legal actions. The city habit of “We’d rather fight than settle,” keeps local lawyers attached to the city like Pilotfish to the city’s Men in Gray Suits.

The questions were not good. The  planned questions prepared to be asked of the panel of candidates were general and did not deal with specifics, skirted the issues and sought to extract philosophies of the candidates and opinions, not specifics

The Mayor came off as he usually does, boyish, charming, cleancut, earnest… Kennedyesque! Upbeat. You know that bike lanes and greenway extentions and electric charging stations speak to the future and that the developments slowly starting now may bring us pie-in-the-sky bye and bye. Isn’t it nice to think so, as Ernest Hemingway’s hero in The Sun Also Rises said.

Mr. Cibelli projected what a challenger always does that the incumbent did not do enough in the last 2 years when Mr.Roach was in charge.The train station makeover has been an issue for 7 seven years.

Neither candidate even discussed the route of the pie-in-the-sky bus rapid transit system, nor expressed any property tax positions– but no questions brought that future issue up. The questions did not even ask Mr. Cibelli what he would cut if he had to. The Mayor was not asked it either. This dumbfounded me. You have to ask that question.

The Women’s Club has to be more profound and succinct in asking questions about the future not about past performance. These forums seem to have as a mission to provide solace and hope to the people, and to project the incumbents as just wonderful, hard-working and thinking people rather than afflicting confident incumbents and getting challengers to think with positives rather than attack with negatives.

The council candidate incumbents each expressed the smug confidence and belief in their own earnestness and self-righteousness. As we know in the politics there is the importance of being earnest. The council candidate challengers Murphy and Encarnarcao projected a concern about the reality of the White Plains situation, offering the possibility that they would try to pay attention to city rising costs, rising taxes and be responsive to the citizens. Some of their suggestions sound very intriguing:

Encarnarcao’s suggestion of a surcharge on non-profits for city services — and a City STAR for city residents on city taxes, but whether the state would have to OK those as it does the sales tax is the question.