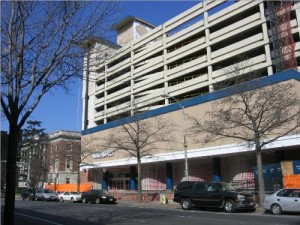 WALMART White Plains, no longer a staple of Main Street in May, 2006, prior to its opening in July, 12 years ago. WPCNR Archive

The Mayor’s Office told WPCNR this morning  that Walmart notified the Mayor’s office yesterday to announce they were closing the Walmart location adjacent to city hall effective August 10.

The Journal News reports Walmart is looking for another location in the nearby White Plains area with outdoor parking. The Journal News quotes Walmart’s Philip Keene, a spokesman, saying the “less than ideal financial performance” of the Walmart store was a factor.

The person WPCNR spoke with said the city is considering how to react to this at this time and has no immediate statement.

A call to the Communications Office of Westchester County Government for a statement from the County Executive George Latimer on the departure of Walmart from the County Seat has been made.

Walmart had no statement other than they were spending $52 Million on upgrading Walmart stores in New York in a news broadcast by News12 The Bronx.

Four hundred persons work in Walmart White Plains and all will be either transferred or given severance according to News12TheBronx.