↓
Home Menu ↓
Home→Mr. Latimer Humble, Short, Sweet and to the Punch: New County Executive “Lincolnesque” in Simplicity, Urgency, and Pragmatic Reality Address. Promises Respect for All. Recognizes scores of government officials in overflow audience. Says We Are All in This Together. Calls for “urgency.” 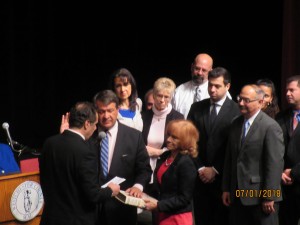 NY Governor Andrew M. Cuomo left administers ceremonial Oath of Office to County Executive George Latimer, while his sister, (beyond Mr. Latimer’s left shoulder) looks on, and his wife, Robin holds the Bible on which Mr. Latimer has placed his hand, at Sunday’s Ceremonial Inauguration of the new County Executive at Westchester Community College. 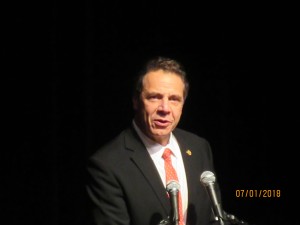 What Mr. Latimer has done in his 30 years in politics was lauded by Congresswoman Nita Lowey , Congressman Eliot Engel, and Mr. Latimer’s colleague in the State Senate, Andrea Stewart-Cousins, and NY Attorney General Eric Schneiderman.

After listening to their praises, Mr. Latimer showed and told why. 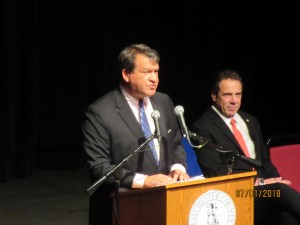 County Executive Latimer began naming about  75 participants in government of towns, the county government, union heads in the audience  and asked the packed Hankin Academic Arts Building Theatre on the Westchester County Community College Campus to give each of the officials their applause.

After he introduced county legislators, and mayors, and a surprise guest, former County Executive Andrew Spano, he recounted the tough campaign that he ran against Robert Astorino that turned into a landslide victory when he had been given little chance.

He  explored why he is in politics. Why he kept going after race after tough race:

“Here I am an overnight success story 30 years in the making.  I’ll never forget senior meeting visits in Mamaroneck, train station mornings strung out one after another and  another, repeating my name over and over for two and a half hours to commuters.

“Campaigns are a crucible one has to endure and master if you hope to obtain and use power for good. But we still go on  by force of will or faith whatever drive we have to use our time and energy  and our ability for the best possible outcome for the people that we serve for our neighbors and the neighbors we haven’t met who share this particular time in the cosmos with us.”

“Today’s event is a celebration of democracy, not because I won this particular office but because the American plan that was authored by founding fathers long deceased, envisioned a republic that would allow a popular decision of our leadership and all would acquiesce to the wisdom of the ballots.

“No armies march on Election Day or Inauguration Day. This peaceful transfer of power is the absolute rock upon which we render this experiment of democracy. I have sought and you have granted four years to direct the county government of ours. I deeply appreciate your vote of confidence and I treat it not as a blank check from you to me, but rather as a promissory note from me to you, every single one of you, that it is my intent to serve you wisely.”

He called Westchester “a beautiful piece of land,” having once seen the county from a small plane long ago. He shared his thoughts that came to him as he looked down on the county:

“I couldn’t tell the location of the street in Mount Vernon I grew up on, where Westchester and The Bronx meet. The jurisdictions of the towns, villages and cities were invisible.

“The  one inescapable impression is clear. We are all on this patch of land together.  The strong and the weak.  The skinny and the fat. The wise and the foolish, we’re all together under that blanket of green.

“This is how I’ve tried to represent people in the four legislative bodies I’ve served in (Rye, County Board of Legislators, State Assembly and State Senate) and now how I hope to govern as County Executive that we are all in this together.

“You and I and nearly a million people outside these walls,  that share this land and this time,that those people concerned about the money they spend on taxes, we will do our best to be wise stewards of the money we have and do our best not to raise taxes for sport or ideology.

“ But it must also be true that neither we cannot turn our back on the assets  created and accumulated over the years, the physical assets of parks and roadways and the fiscal assets of cash flow and high bonding and disregard them because in this moment we let anger and ideology make us fearful to do what is necessary to protect those assets

“We may lose a future election. But we lose so much more when we fail to protect what our fathers and mothers, grandfathers and grandmothers gave us this magnificent Westchester.

“We have to do what is practical, pragmatic and correct for the long run not just an explanation.

“We want to treat our colleagues on both sides of the aisle as partners in this continuing experiment in Democracy. No Democrat or Republican voice will be ignored. All voices should show respect for all other voices. When we turn rude, we pit neighbor against neighbor. It is tearing this country apart and we cannot let it tear our county apart.

“Civility is not dirty word. It is not weakness it is true strength to show respect to those you disagree with.

“The sooner we remember what got us through the great crises of our country, revolution, civil war, depression, world war that we held common purpose and common effort then the sooner we can repair the damage done to our country by selfishness and political parties.

He observed 1,454 days of his term remain, and he would be gone:

“ In a snap of fingers  my time will be done on this job,too.

“Let us debate the issues before us: the airport, Playland, social services, housing, consumer protection, immigrant rights and come to conclusions and decisions and let us do so in an atmosphere of mutual respect and cooperation.

“This I pledge to you to each and every one of you. I am a boy from the south side of Mount Vernon still by way of Fordham, NYU, Nestle, ITT, Albany and the City of Rye. I’m simply one of you.  I’ve been given this great task for four years.

“Give me your help. Give your friendship and I will give you the best of my ability.

“If do this together we will have done our jobs as Americans and Citizens of Westchester.”

Mr. Latimer spoke for 12 minutes and 19 seconds. Short, sweet, and to the punch. 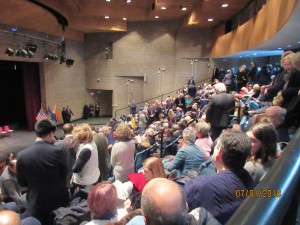 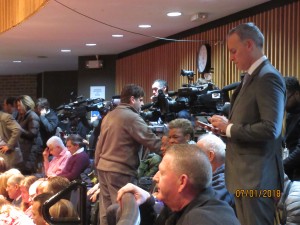 A Cadre of Media Covered the event. 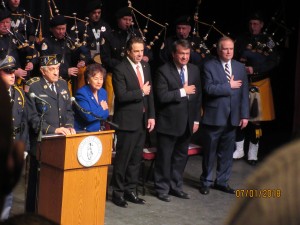