↓
Home Menu ↓
Home→Down the Rivers of History. Rhine and the Danube Harbingers of the Future through the Past 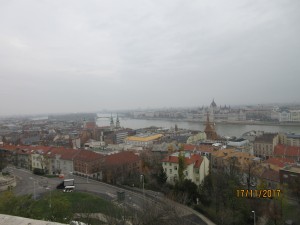 The mists of the future viewed from the heights of Buda Saturday, looking across The Danube River, at its sister city, Pest.
WPCNR NEWS AND COMMENT. By John F. Bailey November 20, 2017:
A jolly good morning to you, Ladies and gents.
Are you well?
Did you miss me these last two weeks?
I return  with a new perspective.
I saw the last thousand years of history flash before me in old cathedrals, magnificent castles perched impossibly on impossible-to-scale crags overlooking the Rhine and Danube Rivers.
I saw architecture and styles uniquely beautiful and meticulously craftedfrom Romanesque to medieval to Gothic, built without the aid of modern machinery. I saw countless miracles in stone.
I saw palaces built to the egos of rulers–The Hapsburg Palace in Vienna, the Hapsburg Summer Palace outside of Vienna. The Marksburg Castle. Saw tables where knights ate.
Abbeys where monks lived, taught and preserved history, and travelers stayed in accommodations a far cry from the Viking Skadi–that whisked us and 385 others down these rivers of remembrance and perspective .
I saw magnificent art. Ballrooms that astounded me cloaked in gold leaf. I walked where Napoleon walked. Saw the grandstand where Hitler addressed thousands in Nuremberg.
Saw “Stumble Stones” — golden tiles in sidewalk pavements in front of homes and businesses telling that at that house, Nazi SS pulled out the residents, detained them and then stated the date they were murdered and where they were murdered. The names of those murdered and spelled out for all to see.
I saw the 60 pairs of gold shoes on the bridge in Budapest where Arrow Cross soldiers (Nazi sympathizers) lined up an unknown  number of Jews on a bank of  the Danube in 1944, and ordered the prisoners to take off their shoes.
After they removed their shoes, the soldiers shot them in the back and they plunged into the Danube below. Today the gold shoes of every style of the time are on the bridge to recognize those nameless who perished. Why were they shot by the Nazis? The Nazis needed the leather.
I was uplifted by church spires that soared into gray skies, the spires’ resilient assertiveness piercing the gloom of existence of times past and today. I saw Maria Theresa’s bed. I saw the square where Hungarian Students were killed by Soviet troops in 1956, by snipers from the Parliament building.
I saw tombs of Saints.
I drifted down rivers of legend, saddened by the blood shed in conflicts that have raged along those rivers for 2,000 years.
Saw places of homage and horror and achievement. I was privileged to see it all and gain a little understanding of the prides, achievements and follies that have preceded our little 200-year old nation.
I come back a great deal with a perspective how little has changed in mankind over these last 2,000 years. Nationalism and greed still hurt common people and create international conflicts. Hatred of a person because of their race and religion still fuel horror and conflict.
As a traveler you are disconnected. Like the old “drifting cowboy” in western fantasies,  you are not involved in the countries and towns you are passing through.
And yet, and yet, seeing the scenes  where 2,000 years of European “diplomacy,” and “conquest,” eerily reminds you you are not effected, but you are connected to the past and are forced to contemplate the consequences which you, today are forming the consequences of today’s behavior
Because the same things are going on this very week.
I found out that German food and sausage is very good. I discovered “smoky” beer in Bamberg, Germany. I tasted great German red wine at a  vineyard in Melk. I toured a windmill in Holland, and marveled at the engineers that figured that out thousands of years ago.
Everywhere I was observing a living museum of man’s and woman’s achievements for each other  and crimes against one another to date.
Another thing: when monuments were destroyed in World War II, communities afterwards rebuilt their cathedrals, duplicated the interiors, windows, statues that were destroyed.
Of course, I am a student of history, maybe you are not, but still what I saw would take your breath away and make you think hard about today.