↓
Home Menu ↓
Home→DEVON PERRY ENDEARING, CONFIDENT IRRESISTIBLE ANNIE OAKLEY- WOMAN FOR THE AGES IN WBT’S ROLLICKING IRVING BERLIN RIPSNORTIN’,CRACKLIN’ CLASSIC REVIVAL. ADAM KEMMERER HER DASHING FRANK BUTLER IN “ANYTHING YOU CAN DO I CAN DO BETTER” ROMANCE! 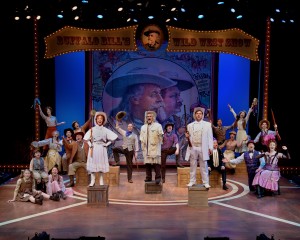 No Business Like Show Business! The hard-working, over-the-top entertainers!

From the moment, Devon Perry struts in as saucy 15 year old Annie Oakley as contestant in a marksmanship competition to secure Buffalo Bill’s Wild West Show a performance at the Wilson House on the vaudeville circuit, she wins you over, as she wins the rakishly rugged cowboy Marksman champion, Adam Kemmerer’s Frank Butler – with determination, innocence, and being-true-to herself ‘tude. 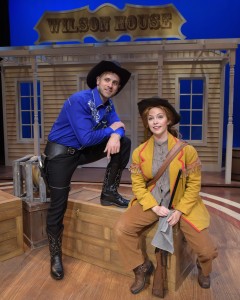 Perhaps one of the first career women in America  to earn a reputation in the late 19th century, Annie’s character in Ms. Devon’s talents, is one of the first true life heroines of American women.  She never compromised and still won the man she loved on her terms.

The Irving Berlin masterpiece of a musical, Annie Get Your Gun, (perhaps his most consistently entertaining spectacle with every song a show stopper) hit Broadway like gangbusters in 1946 and ran for 1,147 performances. Audiences went out humming and toe-tapping and above all feeling so good hearing songs that mirrored their own hearts. It’s stampeding through audiences at Westchester Broadway Theatre’s living Hall of Fame for Hit Shows.  What a score:

Anything You Can Do I Can Do Better, Doin’ What Comes Naturally, There’s No Business Like Show Business, They Say It’s Wonderful, I Got Lost in His Arms, I Got the Sun in the Morning and the Moon at Night, The Girl That I Marry, and An Old-Fashioned Wedding.

Ms. Perry plays Annie very believably from age 15 to grown-up, from tomboy to a lady who can handle herself, a man, as well as a gun, only coming to realize, You Can’t Get a Man With a Gun.

She mugs and threats, and laments about, frowning, with pouting lip, and determined shake of her head at the end of Act I when she delivers this humorous Berlin classic. Ms. Perry sells all her songs solidly. You’re a man, you want to sweep her up and take her out on the town. You’re a woman you hope fervently that Ms. Perry’s feisty little heroine gets her man.

Kemmerer as Frank Butler, the Buffalo Wild West Show top draw for his marksmanship prowess  hitting clay pigeon after clay pigeon and dozens of trick shots, is stunned when Perry, the 15 year old Annie Oakley hits more targets than he does.

Annie despite being awestruck by the rugged Mr. Kemmerer, does her job refusing to be awed by the romantic feelings she’s feeling. Frank, though is enjoying his life as “I’m A Bad, Bad Man” with the pick of woman-admirers.  Kemmerer has swagger, the rough edge of the legendary cowboy image and is not  the typical pretty boy baritone, singer without swagger who have played this role in the past.

Traveling east on the Overland Train, Frank and Annie, (Kemmerer and Perry) duet on They Say It’s Wonderful (one of my favorites in this show). You first hear Perry’s ability to phrase a song with heart, that you just cannot help listening to.

Ms. Perry  delivers the goods:  wistfulness with vibrato that is so right, a voice to haunt a moonlit night. Kemmerer, a confused Frank Butler transitions from no nonsense woman-wrangler to a man who has just realized something so wonderful has happened to him. It happens that way. 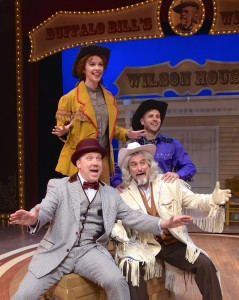 The Wild West Show is not doing well, and  the scheming manager of the show Kilty Reidy as Charlie Davenport (left above) (who gets loads of laughs with perfect timing), convinces Buffalo Bill (Gary Lynch), (right above) to merge his show with his competitor Pawnee Bill.

Frank is annoyed at Annie getting top billing in the show, and decides to jump to Pawnee Bill’s show where he is expected to wow the debutantes of New York. Sarah Cline who plays one of the debutante-investors does a very winning pitch to Frank, and Ms. Cline doubles in acid catty jealousy as Dolly Tate, the number one assistant to Frank in the show who resents Frank’s infatuation with Annie.

When he meets Annie again in New York at the elegant Hotel Brevort his old feelings for the “Little Sure Shot,” Sitting Bull’s Indian name for her, return.

But, true love does not go smoothly as their Annie and Frank’s egos continue to keep them apart. However Marshall Factora as Chief Sitting Bull (providing timely hysterical lines throughout) devises a way. What is the solution to bring this romance to Happily Ever After? Will Annie miss her shot at happiness?  Spoiler alert: Annie Oakley and Frank Butler were married for fifty years.

Other show-stoppers—The No Business Like Show Business Number, (so good you love it twice);  and of course the Anything You Can Do I Can Do Better where Perry delivers the signature Ethel Merman song with a style all Perry’s own with shining confidence and efervesence!  The romantic  leads Perry and Kemmerer have a lot of cute fun with the contrapuntal duet An Old Fashioned Wedding where each sings different lyrics to the same song. She has big plans he has small. Conflict erupts. Its’ charming as any wedding planner knows.

This show really moves. The scenes are quick. The intrigue ingeniously silly. The clashing egos of Annie and Frank classic “Battle of the Sexes.”

Richard Stafford has directed and choreographed this production flawlessly packing it with wonderful real West, turn-of-the-century costumes and cowboy outfits; dancehall girl outfits, crafted by Costume Designer Kara Branch. Making the dance scenes with action daringly put on collision courses the style of the show puts you into fading West period of the 1880s.

The WBT orchestra  directed by Shane Paris, with John Bowen, James Mack, Jordan Jancz, Brian Uhl. Steven Bleifuss  handles Irvin Berlin classics with gusto, flare, humor, notes that linger and never override the big singing of Kemmerer and Perry. Perhaps their most impeccable performance. The Irving Berlin music is so exciting in this show, it is so easy to overplay because it’s fun. They never overplayed.

Annie Get Your Gun plays for the next month through November 27 at WBT. Go to the website www.BroadwayTheatre.com  for showtimes, and remember you get dinner with tickets. I loved the pork loin—real Wild West and tasty, just like Delmonico’s. Or dial the boxoffice at 914-592-2222.