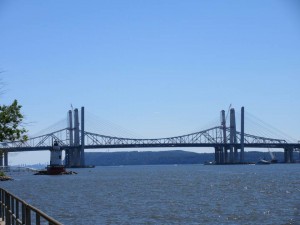 Governor Andrew M. Cuomo today announced the opening of the first span of the Governor Mario M. Cuomo Bridge, an iconic twin-span cable-stayed crossing that will serve the Hudson Valley for the next century.

The Governor commemorated the milestone with a ribbon-cutting ceremony that featured more than 800 dignitaries and residents from Rockland and Westchester counties on the cable-stayed area of the first span.

The construction project is one of the largest in the nation and the biggest in the history of the New York State Thruway Authority. Four lanes of Rockland-bound traffic will begin crossing the first span late Friday night into Saturday morning.

“The new Mario M. Cuomo Bridge is much more than a magnificent, cutting-edge structure, it is a symbol for this state and this nation. The opening of this new span shows the world that we have our energy and our boldness back, that we will continue to accomplish greats things, and that we are building bigger and better than we have in decades,” Governor Cuomo said. “Excelsior reminds us that the motto of this state says reach even higher, and we’re not only building a new bridge with this in mind – we are building a new state and a stronger economy. This historic project is providing quality jobs, hope and opportunity to both residents and visitors of this state, and I look forward to future generations of New Yorkers crossing the Hudson River on this new bridge for the next 100 years.”

Governor Cuomo drove on the new bridge span in a 1955 Corvette with Armando “Chick” Galella, who drove the same model year Corvette as part of the inaugural procession that crossed the Tappan Zee Bridge on December 15, 1955. The Sleepy Hollow resident is a veteran and Bronze Star recipient who survived the December 7, 1941 attack on Pearl Harbor.

The Governor Mario M. Cuomo Bridge will partially open to four lanes of Rockland-bound traffic overnight on Friday, August 25, weather permitting. For the next few months, northbound/westbound drivers on the New York State Thruway (I-87/I-287) will cross the Hudson River on the new bridge, while southbound/eastbound drivers will use the old bridge, each having four traffic lanes available. Later this fall, the new bridge will completely replace the 62-year-old Tappan Zee Bridge when four lanes of Westchester-bound traffic are also shifted onto the first span.

At Governor Cuomo’s direction, the New York State Thruway Authority has managed the bridge replacement project since 2013 with two fundamental objectives – first, to fully open the bridge to traffic in 2018, and second, to finish the bridge at or below the budgeted cost of $3.98 billion. Currently, the project remains on budget and on schedule, as construction of its second span continues to progress.

After all traffic has been shifted onto the first span, design-builder Tappan Zee Constructors will demolish the landings of the old bridge, which occupy the same footprint of the second span, and connect the second span to land. When completed, drivers will reap the full benefits of the 3.1-mile twin-span, which will include:

The original Tappan Zee Bridge, linking Rockland and Westchester, opened in December 1955 and there are now more than 140,000 vehicles crossing it daily.

As the first cable-stayed bridge ever built across the Hudson River, the new Governor Mario M. Cuomo Bridge uses steel cables placed at an angle to connect the bridge deck to vertical towers that extend high above the roadway. The bridge features eight 419-foot towers standing at a five-degree angle, and has a total of 192 stay cables that would stretch 14 miles if laid end-to-end. More than 110,000 tons of all-American steel is being used to build the bridge, and approximately 7,000 people have contributed to the project to date, totaling nearly 9 million work hours.