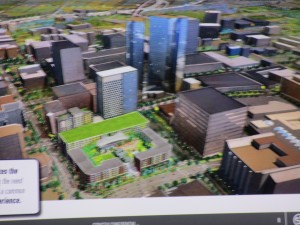 THE “REIMAGINED” WHITE PLAINS MALL — LOOKING EAST DOWN HAMILTON AVENUE. DR MARTIN LUTHER KING JR BOULEVARD IS AT CENTER BASE OF GRAPHIC. THE RITZ CARLTON CONDOMINIUMS AND TOWERS ARE UPPER CENTER OF PICTURE.

Two weeks before White Plains gets its first look at what Parsons Brinkerhoff, the MTA, and the city transit center steering committee propose for redevelopment of the transit center,(based on collected citizen-preferences), owners of the White Plains Mall 200 Hamilton Avenue, presented a project Monday night to the Common Council that will reimagine the 1972-built mall into a residential community, public space and restaurant destination with regional appeal. 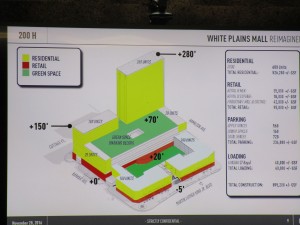 Hamilton Avenue would include a bike lane access to the new railroad hub envisioned as part of   the transit district redevelopment, with a widened median. Entrance to the new concept Food/Craft Hall openair space would be off Dr. Martin Luther King Jr.  Boulevard, with a fountain on the corner of  Barker and MLKJBLVD.

A 28 story, 260 unit apartment building would be built on the corner of Hamilton and Cottage Place, diagonally across  from the Residence Inn. Adjacent to the 28 story would be a 15 story apartment, complex with 120 units, and on Martin Luther King Jr. Boulevard, 100 units with an additional 120 units fronting Hamilton Avenue. The residential components surround the property  with retail (mostly restaurants) at street level on the sides.

The Martin Luther King, Jr. Boulevard frontage would be re developed into restaurants and stepped heights of residential units. Parking would be in garages inside the structure and a private greenspace created on the roof of the interior garage, 7  stories above the street for use of apartment residents. 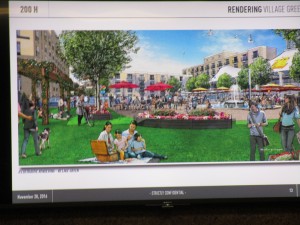 Rendering of the Food/Craft Hall, showing kiosks and residences rising in the background

The public would have use of the public space reminiscent of those in old Spanish courtyards, sprawling in scope for concerts, with enticing kiosk food concessions and traditional contemporary restaurants  surrounding the interior courtyard. Mr. Null coined this public space the Food Craft Hall. It would be accessible by a street entrance on Martin Luther King Jr Boulevard  where the present mall is entered now. The Corner of Barker and Dr. Martin Luther King Jr Boulevard looking south to entrance of the public space and parking.

The proposal suggests thee rental complexes of  28 stories at the highest and stepping down to surround the “mall block” with residential with an open air public space and food kiosks inside. The apartments are planned to incorporate the city requirement that 20% of the units be classified as affordable housing linked to income.

The plan is to build the “reimagined” mall in three years from the time it is approved (5 years out ). Streetscapes is spearheading design of the project which attorney for the project.

William Null said the concept follows the national trend of providing rental housing to repopulate downtowns with street attractions, restaurants, entertainment that appeal to persons in their 20s and 30s, who seek the best of suburban and city worlds, close to public transit so they do not have to have a car.