WASHINGTON – National Air Traffic Controllers Association (NATCA) President Paul Rinaldi, commenting on the news today of the passing of aviation legend Robert A. “Bob” Hoover, at the age of 94:

“All of us at NATCA join the aviation community in mourning the passing of this extraordinary, legendary figure in our nation’s aviation history. He was widely regarded as the greatest stick-and-rudder man who ever lived.

Through his incredible flying skills over so many decades, he became a larger-than-life figure and helped raise our levels of imagination and excitement about the beauty of flight. And as we have heard from those who knew him best, he was also a great person, which stands as a testament to his graciousness and generosity.”

“I was honored to join NATCA Executive Vice President Trish Gilbert and several of our members in honoring Bob at both the Aero Club of Washington’s 2014 Wright Brothers Memorial Trophy dinner and at the 2014 celebration in Los Angeles which marked the creation of the Hoover Hall of Honor. To be in his presence was absolutely awe-inspiring. He left us a legacy of inspiration for pilots and aviation professionals and will forever be remembered as one of the world’s greatest aviation legends.”

The Aviation Hall of Fame Writes:

After three failed attempts to flee from his German captors, World War II fighter pilot and prisoner-of-war Bob Hoover was running out of escape options. When a staged fight among the other prisoners diverted the attention of the prison guards, the former Stalag Luft I resident hopped a barbwire fence and went looking for the refuge of Allied territory. While he didn’t quite make it to Allied land on foot, Hoover did manage to find an abandoned FW-190, which he cautiously flew to the then-recently-liberated Holland.

Learned to fly at Nashville’s Berry Field and taught himself aerobatics.

Assigned to the 52nd Fighter Group in Corsica.

Flew 58 missions before being shot down and spent 16 months as a POW.

After the war, was in the Flight Evaluation Group at Wright Field, Ohio where he flew captured aircraft and the latest USAF aircraft.

In 1950 he began a 36 year association with North Aviation and Rockwell International.

Only person to serve two terms as president of the Society of Experimental Test Pilots.

Captain of the 1966 U.S. Acrobatic Team at the international competition in Moscow. 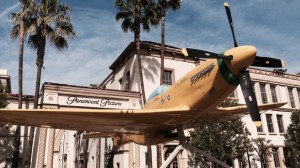 World renown aerobatic pilot and his P-51 in a main attraction at the Reno Air Races. “Ole Yeller” Mr. Hoover’s P-51 Mustang is shown outside Paramount Studios in Los Angeles.

In 1985 established a coast-to-coast record flying a P-51 form Daytona Beach to Los Angeles in 5 hours and 20 minutes.