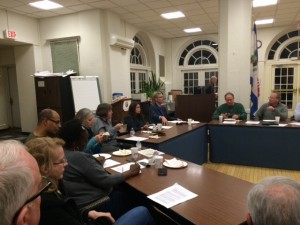 Mayor Tom Roach holds court at the Council of Neighborhood Associations Monday evening.  (All Photos for WPCNR by Ayana Meade)

Tuesday night, Mayor Thomas Roach discussed future plans for White Plains in front of a full crowd at the Education House during the White Plains Council of Neighborhood Associations’ annual “Pizza with the Mayor Meeting.”

The mayor talked for about a half-hour followed by another half-hour of questions from attendees. Topics discussed spanned multiple subjects with the majority of the discussion centering around the numerous development projects springing up in and around downtown White Plains—the main goal being to create a more vibrant downtown with increased pedestrian access.

The Mayor revealed Heineken’s announcement to move its creative departments from Manhattan to White Plains, and new plans to improve regulations on the city’s taxis,including switching to a metered system, (replacing the city wide zone fee structure now in effect).

The Mayor said the city tax cap they would be working under in preparing the 2016-17 budget would be .16  (point 1/6)  of a percent instead of the 2% the city had complied with  the previous two years, but said he thought the property tax impact would be helped by the increased development in the city.

The Mayor announced increased security for the New Year’s Ball Drop this year, and talked about what’s ahead for the developments now underway. 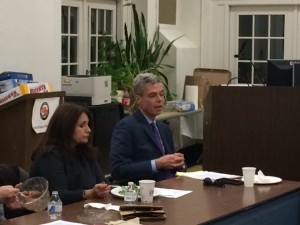 The largest project discussed was the TransCenter which the mayor noted will play a key and pivotal role in all other development projects throughout the city.

When asked by an attendee whether it would be necessary to rewrite the city’s comprehensive plan, considering all the development projects currently underway, the mayor responded that the analysis and data gathered during the redevelopment of the TransCenter will be applied as feedback on the city’s other development projects. The TransCenter Task Force is charged with hiring individuals who will set up public participation forums through virtual meetings, that will provide all citizens with an opportunity to weigh in. (The firm Parsons-Brinkerhoff has already been selected by the city to faciliate the citizen involvement process.)

Effects on the City

In response to concerns over whether the projects will be pushing out lower income residents and whether they will provide sufficient affordable housing units, the mayor said the majority of the projects will not be pushing out lower income residents because they’re being built on sites that had no residents to begin with—i.e., parking lots, old car dealership, etc. [with the exception of the Esplanade Properties –being converted to rental apartments, pushing out seniors now housed there—not mentioned] 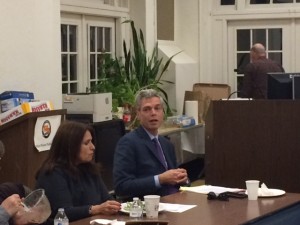 Mayor Roach delivered a virtual “State of the City” to the Council of Neighborhood Associations.

Alternatively, the mayor suggested, instead of just having requirements, the city should be looking at building properties with smaller units and re-evaluating zoning and parking requirements that can make housing in the city cost prohibitive, especially for lower income residents and young people.

The mayor’s overarching vision in terms of redevelopment is to create a more walkable city with more “life”—a city that provides places and opportunities for people to interact. “Human beings don’t like to go everywhere in their car,” said Mayor Roach. In passing the Complete Streets Legislation his goal is to send the message that the streets are for “everybody.”

When asked whether the projects will be union based, the mayor said that right now it looks like two major projects will be union—55 Bank Street and the Pavilion, saying that It’s something we can’t require but it’s something we encourage. “When you bring in union contractors you get a better and quicker outcome.” The mayor used the White Plains Hospital project as an example.

Crediting the city’s changing landscape and redevelopment projects as being supportive of “creatives,” the mayor announced that Heineken USA will be moving their marketing and creative departments from Manhattan to White Plains, adding 55 jobs to the area.  The mayor noted that Heineken’s move will help to persuade other companies to do the same, saying “it’s the back office that you normally get out in the suburbs and to get the creative up here is really great.”

WINTERFEST in heated tent–safe from the elements

In keeping with the city’s plan to add more “life” to the downtown the WinterFest artisanal craft market will be held Dec 12th through Dec 20th in a heated tent at the site of the farmer’s market on Court Street. The mayor also discussed how film crews are taking an increased interest in the area, improving the local economy and providing opportunities for residents to get paid for having their homes featured in films.

At this year’s New Year’s Eve (NYE) celebration the mayor’s main concern is security. This year security will be noticeably different—there will be a gated entry and multi-levels of law enforcement will be involved to keep everyone safe.

Notably, this year’s NYE celebration marks the 100th anniversary of the City of White Plains. Happy birthday will be sung before the ball drop and there will be celebrations throughout the year.  While the city’s authorization came from Albany in 1915 the charter became effective Jan 1st 1916, marking 100 years.

The mayor also discussed the city’s finances, saying that since taking office the city has been within the tax cap every year and has done it without borrowing money for pensions or tax certificates, unlike other municipalities. He explained that the cap is referred to as the 2% tax cap but in actuality its not a 2% cap—this year White Plains’ tax cap is .16%, while the state has a 2% tax cap.  Part of what will help the city stay afloat is all the redevelopment taking place, but he admits dealing with the city’s finances is challenging under the current cap requirements.

During the meeting the French-American School of New York project (FASNY) continued to be a point of contention raised by a couple of attendees. The mayor responded by saying that he believes he ran a good process—saying that he ran civil meetings where people were allowed to speak and be heard. In the end he voted to close the street that would allow access to the school—a decision currently under litigation.

The Red Light Cameras Not to be Used for revenue.

Regarding red light cameras, the mayor says they’ve been authorized but the city is still deciding which intersections they will be used in.  The city’s program will be different than other municipalities—it will not be revenue driven, although it will produce revenue.  Red light camera placement will be focused on intersections that have a high propensity for accidents and the biggest threat to public safety.

Taxi to go to a standardized metered system

The mayor is also working on new legislation for the city’s taxis.  One of the initiatives already completed is the hiring of two uniformed “taxi starters” at the White Plains train station—to help people with taxis at rush hour. The mayor is revising  the taxi ordinance.  The new ordinance will require a metered system instead of the current zone system, in an effort to standardize fare prices.  The new ordinance will also place a limit on how old a taxi in operation can be, with the mayor saying,

“it’s an opportunity to improve things.”