↓
Home Menu ↓
Home→Frank Asprea–A Model Employee–Sets the Standard for Hard Work. And it’s Harder for Him. 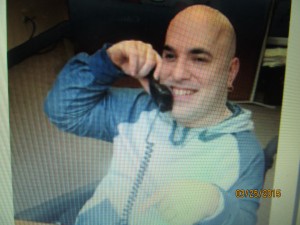 WPCNR PEOPLE TO BE PROMOTED. From Cerebral Palsy of Westchester. March 28, 2015:

United Cerebral Palsy’s Frank Asprea speaks volumes to the gifts that those withdevelopmental disabilities possess. Leading the way with an attitude of gratitude, Frank has not only held consistent employment in the community throughout his career but he has brought an awareness to individuals that the only disability in life is a “bad attitude”

.Frank began working at Cerebral Palsy of Westchester in March 2001 in which he worked as a cashier at the Company store for seven years. One year later, in 2002, he was offered a part-time position at Kohl’s in Port Chester again working as a cashier for the Company. As Frank’s skills progressed he continued to push himself and left Kohl’s as a cashier and was hired into the Human Resource Department at Target in Mt. Vernon, NY in which he was responsible for putting together new hire packets for employees, prescreening potential applicants, ordering supplies for the department, working on computers and photocopying bills.

To say Frank has a heart of gold is an understatement. After years of work
experience in the field of hospitality and human resources he applied for a
full-time position at Cerebral Palsy of Westchester as the Agency Receptionist.
In August 2011 Frank was hired by the Agency and continues to do an
excellent job to this day. Frank says: “I’ve always wanted to be an inspiration
to others. Showing all people that when you put your mind to something you
can do it.”

He then added: “As far as I’m concerned you can never judge a
book by its cover. What you see on the outside is not always what you get on
the inside.”
Due to Frank’s hard work and dedication he was voted employee of the
month in February 2011 and accepted the award for employee of the year in
October 2011! Frank Asprea is an exceptional employee who brings awareness
every single day to the life and accomplishments of those with developmental disabilities