Minnie Minoso, the great Chicago White Sox outfielder who was the spirit of the great White Sox teams of the 1950s died Sunday. Essentially a forgotten man. No one on the Baseball Hall of Fame Veterans Committee has saw fit to put this great ballplayer into the Hall of Fame. However, he now has this poem which I wrote tonight. I remember you Minnie, you and Enos Slaughter the great old St. Louis Cardinal showed me how baseball should be played and a profession should be practiced. Minnie was a ballplayer’s ballplayer. 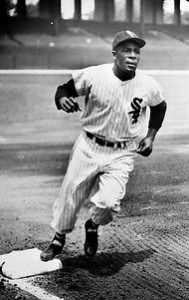 He first caught eyes of fans in the caverns of grand  Cleveland Muncipal Stadium,

Cutting off drives in the forever gaps of The Tribe’s Prairie condominium.

He was coal black, broad-shouldered, catching  GAPPERS because he had no quit. 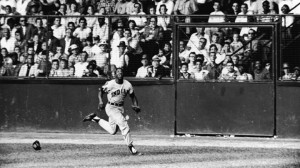 Where he made confines of sweltering Old Comiskey Park  come alive.

The kid from Cuba had so many names they called him Minnie, graceful as his stride.

He turned staid Pale Hose into the Go Go Sox

After he came, they would steal games with a swipe of a bag, bunt shocks

Most feared in the new Hitless Wonders Lineup  he’d deliver with timely “Rope.” 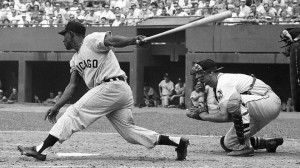 Spray hitter to all fields with big black bat, he’d make a single an automatic  double

Fearing no arm he’d light out with blinding speed, melting down fiercest competitors

He had menace at the plate, even I at 11 years of age could tell here comes trouble.

He was the Senior Circuit’s Wille Mays  fans came  to see.

The cloud of dust the suspension of muscular body airborne– cobra backstop sweep! 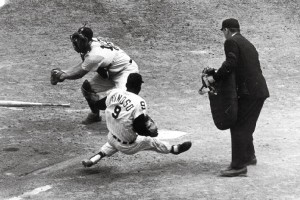 Hitting .300 for nine years, valiantly chasing the General Motors of baseball in thrilling races of the day

He saved a franchise, the Black DiMaggio showing  there was no color in ball just great play.

The Commander,  Bob Elson painted  excitement  in the Midwest night on WCFL.

He Gathered steam like the Broadway Limited rolling past Comiskey Park’s rightfield pavilion with style.

Last refuge from the New York Cubans in the old Negro Leagues, Minnie came to the Bigs sound.

A star from the start.  Fans sweltering in the hot wind blowing through the Romanesque arches

Talked Number 9 – the Number I always associated with “The Big Hitter” to pitch around.

The guy who could take Whitey Ford and Early Wynn out. Get you off to a start or end it in the bleachers. 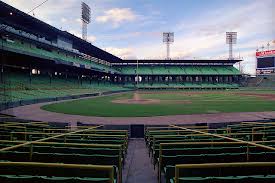 The palace at 15th and Shields is no more. The dash and determination of the Great Minoso–

Ghosts of greatness of the Romanesque Palace  haunting the fans with his statue in the rotunda.

Those who saw him play, remember his abandon, his hustle,  his  espiritu.

Minnie Minoso made all he played with better, something every worker anywhere can engender.

Steamed in the 90 degree nightcaps, when Minnie sliding in tied or won it in fashion,

Saved one for Billy Pierce, Dick Donovan with a dazzler down in the corner shadow