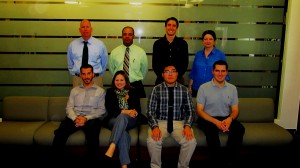 Among the new instructors are two retired law enforcement officers—Rick Lee of Yorktown Heights, formerly with the White Plains Police Department and Douglas Cooper of Mt. Vernon who served with the NYPD. Both are teaching social studies.

Also joining is JoAnn Cupertino of Yonkers who previously served as Stepinac’s Registrar for about 20 years, and is teaching religious studies. She is also the mother of Stephen and Joseph Cupertino, two Stepinac alumni who are on the faculty as well. Stephen, Class of 2001, teaches math and Joseph, Class of 2004, teaches history.

Two of the other new teachers are also alumni: Phil Vecchione of Yonkers, Class of 2007, who teaches English and Nick Borges of Mt.Vernon, Class of 2008, who teaches science. With their appointments, Stepinac’s faculty now comprises 22 alumni members, about one third of the total.

The other new faculty members are Teresa Solimine of the Bronx, guidance counselor; James Park of Stamford, science instructor and Sam O’Hare of Tuckahoe, history teacher

Commenting on the expansion of the faculty, Principal Paul Carty said: “We extend a warm welcome to this diverse group of instructors who will help Stepinac continue its 64-year tradition of providing a comprehensive preparatory curriculum, grounded in Roman Catholic value and traditions. Our commitment to academic excellence has translated into Stepinac achieving a 100% college acceptance rate and our students being accepted by some of the nation’s most prestigious colleges and universities year after year.”