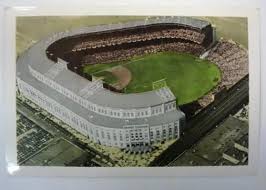 WPCNR VIEW FROM THE UPPER DECK By “Bull” Allen in the Ballantine Press Box Section 30. October 5, 2014:

I hear the “pops” of fans lingering in the ramps to the old upper deck, stomping paper beer cups  the only sounds.

I stare at the melancholy empty diamond. No post season drama in Da Bronx or in Flushing by the Bay, this year, and for some seasons to come.

Sipping the white foam of a  Ballantine Ale and puffing retrospectively on a White Owl Wallop, let’s go over the reasons for this sad season for both baseball teams.

It is a season that has seen two restructurings of New York’s baseball teams and not for the better, it is a selling to fans of   a new commitment to being just in it, and that’s enough and we should be happy with that.

As I write this, with about with the  games dwindled to a meaningless few, the cheerleaders in the press box continued to brandish the cry of there is still time to get the pathetic Wild Card slot in the Major League playoffs–for that 1 game and out privilege. (Really they have to make the Wild Cards best of 5, or 2 of 3.)

And it has been that way all during the long season.

The Yankees knew going into this season they were minus the big bat. Choosing not to sign Robinson Cano, for whatever mysterious reason unbeknownst to us that the sportswriting fraternity has not been able to figure out, they chose early on not to bring in some big lumber even when the anemic  Yankee lineup lost game after game because of not scoring runs just as they lost game after low-scoring game in that pathetic stretch in Baltimore and Tampa Bay..

In the days of George Steinbrenner, you always had to respect George’s push to win. He pulled triggers when the Yankees needed help for a stretch run. He tried. The Yankee management this year  did not try. Until they brought in Chris Young.

Sadly the penurious Hal Steinbrenner chose not to  make more moves. Instead he elected to sign Derek Jeter after a most uncharacteristic walk year performance. What does Jeter do the first year of the new contract? He breaks an ankle. Season over for him. What does he do this year?

Nothing. Jeter has done nothing since having signed that contract. But the mystery is why he has fallen off so suddenly in his batting. He has hurt the team performance. But he has not hurt the gate.  Had Jeter opted to sign for less money the Yankees might have signed Cano. But No, neither did Jeter move off shortstop early in this decade when it would have been helpful to the team had he done so. (Lou Gehrig took himself out of the lineup when he could not handle his position.).

But mysteriously, Cano is not hitting for the power he hit with the Yankees in his walk year that induced Seattle to sign him. Cano is hitting for average and has lost considerable weight and bulk, just like Jeter did after his “walk” year.  So, even had the Yankees resigned Cano, he might not have delivered the power  he did last year. But he’d be hitting. McCann, the big free market signing,  is finally getting it together, but has been a disappointment No Posada, he.

Be that as it may, the apparent silent Steinbrenner fils’ decision to not trade prospects for a genuine  big bopper has killed the Yankee season. They are 76-74. Twelve games to go.

Had they had a legitimate, consistent, healthy big bopper, they’d be at least 10 games better in wins…and probably right up there with the Orioles. Next year there will be no Derek Jeter wake to keep people coming to the ballpark and Hal Steinbrenner is going to wonder why.  Really a bad business decision not replacing Cano. But if Cano was that good they should have signed him. (Editor’s note, the Bronx Lites, finished 84-78. 12 games back of the Orioles, and no 1-Game Wildcard berth.)

If Rodriguez comes back strong in 2015…he may be that bat. But when A-Rod comes back, he may not hit with the power he had. Another thing about A-Rod: he never got any bit of credit for nearly getting the Yankees into the playoffs last September when he came back hitting after he had his hand injury. No one ever said or wrote except me,  what “a gamer” he was in that September stretch drive.

Jeter is gone now, having played his last game. But maybe he will be back in the broadcast booth, on YES. He now interits the Joe DiMaggio role if he wants it. He did represent the franchise well and I wish him well. We perhaps expected too much out of him his final year. Good luck, Number 2. We’ll remember you when the infield ups the middle sieves up next year.

Whether or not the Yankees make those playoffs, the owner of this team has  to make some money-spending moves to bring in major punch to the lineup next year. If he does not, to paraphrase the season ticket sale tagline on  the Yankees broadcast, “The legacy ends now.”

Take the Youth Movement at the Metsoleum in Queens.

Over across the Triboro Bridge, in the last two weeks the Metropolitans will be portraying all the young players they are now using, touting them as their springboard to a great season in 2015. However, the Mets  after getting blasted by the Nationals the day I wrote this, have to win 8 of their last 10 to finish at .500 and have just been eliminated from the Wild Card.

The Mets when they entered June were feeling very good then went into the tank.  June is a cruel month. The  Met broadcaster noted last Thursday on WOR  the Mets were 31-47 against winning teams, but had  a 40-28 record against losing teams. This tells you the Metropolitans are not yet in the class of a winner or have a mind attitude to be..

I think the Mets could have been much better had they made several moves to bring in a major league hitter or two in June. They got a poor year out of Granderson (does any team have as much bad luck as the Mets in their free agent signings? Jason Bay, comes to mind )

Why didn’t the Mets sign Cano? How cheap was that of the Wilponage?

Lower power numbers and all, Cano would have been worth 10 more wins, maybe more,  to the Mets at least.  But no. The Mets did not make moves, and what happened? The team lost heart and fell apart in June, July and August. Meanwhile Cano hit the Seattle Mariners into contention and a .500 season.

That’s why Terry Collins, the manager,  the new Don Zimmer of baseball who keeps his job because he keeps the lid on, well, Collins has to go.  (Editor’s note: They are renewing his contract. How predictable. How incredibly predictable.)

Collins does not get upset enough when the Mets lose concentration on the basepaths (it has happened all season). He does not manage the team well defensively. Met fielding has cost them terrible losses, and they always seem to make crucial errors when the game is on the line. They are fundamentally unsound and look bored most of the time.

The Met pitching philosophy from top to bottom has to be examined. They burned out Harvey last year, and he may come back . But he is not going to have the velocity. The Mets have come up with more sore arms this year. The Met pitchers when they are good are being overworked.  Somehow the Mets need to bring in a professional pitcher who has won big time in the major leagues for a substantial period of time as a pitching coach who will build arm strength. Fix the mechanics. And stop the sacrifice of arms.

Over the years writing this column, I marvel at what Warren Spahn said. He threw every third day and pitched complete games every 4th day. He never had a sore arm. Spahnie said pitchers have to build leg strength and throw. And Spahn had a repertoire as  hard to throw as any of the pitchers today. But he threw effectively into the 10th inning many a time.

Perhaps there is no greater irony that when players come to Mets clubhouse, they just wilt under the pressure of the not caring, ennui,  that permeates this  franchise.

Willie Randolph could not tolerate the lack of hustle of the Mets when he ran them (the last time the Mets were in contention was when Randolph managed).

Chris Young destroys the league with Arizona and this year he does not hit  for the Mets. The Yankees pick him up when the Mets let him go. Young suddenly looks like Hurricane Hazel. He wins a game for the Yankees in his first game. He wins another with a 3-run dinger. Is the clubhouse in Flushing so depressing that it sucks the competitiveness and pride out of the people who walk into it? This tells you about the “Metsoleum” atmosphere in Flushing. That has to be changed.

Now, it is very well and good that the Mets have young players. Hopefully they will continue to develop. Maybe Harvey and the sorearm squad will come back strong as ever next year. The Mets will probably start out strong, but once the young players go around the league they will be scouted and the league will learn their weaknesses. That’s why the farm system will need to be supplemented by at least one professional hitters (not in their mid-thirties, but late 20s with more good years to go)

My prediction: next year the Mets will revive some of the slogans of the past “Now, the winning starts,” or “The Young Guns” or “The Flushing Gang”

Well let’s not have slogans, let’s not jump up and down like you’ve won the pennant everytime you break a 5 game losing streak. That is so sad,pathetic and shows lack of pride and self respect. Win a game when something is on the line.

Sadly, the mantra to sell season tickets to the Metsoleum in Queens was already spoken by Manager Terry Collins. Here is what he said after his team lost 3 of 4 to the Nationals when it mattered:

“I do not think we are that far away. Our bullpen is coming along with the young guys back there — tbe bullpen will be deep and our young players will have another year under their belt(s). ..we’ve made a lot of changes here and I agree with what Sandy Alderson said three months ago, that we’re very, very close.”

This is what the Mets say after every season.

Derek Jeter? He’s starting a website to tell you how players really feel.