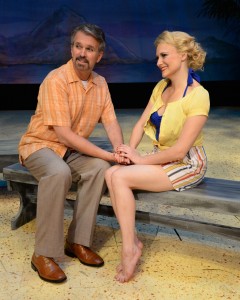 George Dvorsky as Emile deBecque and Hayley Swindal plays Nellie Forbush on the beach falling in love in Westchester Broadway Theatre’s revival of SOUTH PACIFIC that opened this week. All photos by John Vecchiolla

First there’s the lilt of the score as the overture begins, then those familiar strains of Some Enchanted Evening, Wonderful Guy, Bloody Mary, Wash That Man Right Out of My Hair, (you’ll know ‘em, Mack) as the lights go up on a idyllic terrace overlooking the Pacific, and you’re transported into another time, world and mindset – the South Pacific islands at the height of World War II at the land of make believe, Westchester Broadway Theatre. The revival of the Oscar Hammerstein II and Richard Rogers is an enchanted evening. 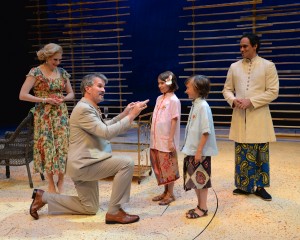 The enchantment starts when the two children of Emile de Becque go through lessons (Isabella D’Erasmo and Kaleigh Picco alternate as Ngana, and Kyle Arzaga and Daniel Ward as Jerome)  on a terrace set for tea, dueting cutely on Dites Moi— one of the great grab-the-heart-at-the-get-go openings.

South Pacific is all about the heart, how its longings take you over; how the wishes are fulfilled; how they are dashed, and the triumph of the heart related through characters remarkably believable with Oscar Hammerstein II and Joshua Logan book that moves right along to plot-sensitive, action-consistent songs—one Broadway classic belt after another.

Nurse Nellie Forbush (Hailey Swindel, previously seen here in Nine) coyly finds herself attracted to the dashing older man, and sings I’m a Cocked Optimist. DeBecque (crafted perfectly by baritone suave by George Dvosky, who created the title role in The Scarlet Pimpernel on Broadway)  lifts your heart and makes Nellie’s beat faster with a splendid Some Enchanted Evening.  (Come on, you remember the words) In minutes, you care about these characters from two different worlds, as Nellie fights her reluctance to fit into a marriage where she will have to be step-mother to two Asian children from de Becque’s first marriage. He invites Nellie to a party to introduce her to the island, the romance is heady but Nellie is not sure. 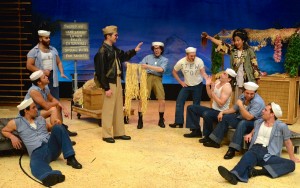 Then we go to the navy base where the sailors, Seabees and Marines working the port, get a visit from one of two scene stealers, Bloody Mary played with comic timing somewhat and dated Pidgin English by Joanne Javien, who tries to make a Yankee Dollar by selling souveneirs to the bored sailors. Why are they bored? They ain’t got Dames, as the rollicking crew rouses all with There’s Nothing Like a Dame.

Javien wraps up that seen with an exotic ode to Bali Ha’I the special island. javien who is more attractive than most actresses I have seen play Bloody Mary,makes the mystery of Bali Ha’i come through with lilting, lush, broads sweeps of her voice. Really she takes one of the weaker songs in the score and because of the power of her voice, makes it into a promise that keeps.

But wait, there’s a war on, and the Navy is trying to get into it instead of hanging around the base. The dashing Zach Trimmer, Lieutenant Joe Cable  arrives at the Commander’s office, played with navy-perfect pompousness and authority by James Van Treuren who brings an edge of sharp reality to every role he does (he stepped in on Opening of Kiss Me Kate here two years ago and played the lead spendidly—an actor’s actor).

Trimmer as the cocky pilot and Treuren as the base Commander are no-nonsense military presences. As Cable seeks to go behind enemy occupied islands to spy and report Japanese warship convoys.  He seeks the help of de Becque. 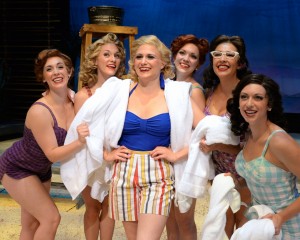 Swindal tries to Wash That Man Right Out of My Hair on the beach only to have de Becque overhear her. And as they leave, Swindal tells the woman’s side, singing Wonderful Guy. Swindal’s way with the swing of the upbeat songs Nellie sings makes Nellie particular appealing to the audience, while underlying her conflict as to whether she will be happy. After all she is from Little Rock.

While Cable waits to see if de Becque will change his mind, he hangs out with the sailors and the comic bosun Luther Billis (Bill Dietrich, master of the comic quip) inveigles Cable to take a night cruise to Bali Ha’i. Romances blossoms as matchmaker Bloody Mary introduces Cable to Liat, her daughter (Alison T. Chi. Cable and Liat are instantly attracted. Cable sings Younger Than Springtime to her with a masculine sensitivity that makes this throwback romantic love song not only sweet but powerful. 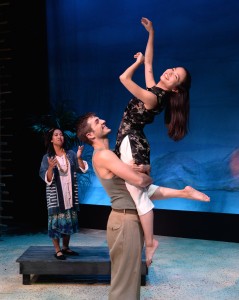 Zach Trimmer as Lt. Cable and Alison T.Chi as Liat discovering each other

In Act Two, you are started off splendidly with a real slice of how life was in World War II, with Thanksgiving Follies, a camp holiday show, with a procession of sight gags children and the adults will love. 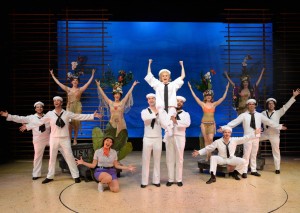 Ms. Swindal  with her beyond cute sass channels a Mary Martinesque duet on Honey Bun with Bill Dietrich as Luther Billis dressed in a grass skirt. He is particularly comic and she gamin-Gaynor cute! (Mitzi Gaynor played the role in the South Pacific movie version.

De Becque sends Nellie flowers to try and win her back, but she does not receive them. De Becque laments his fate in a another very effective treatment of This Nearly Was Mine. His ringing voice delivers the pain, the regret, the emptiness of loss that makes this song resonate with any male who has lost a woman they were crazy about.

Director Charles Repole and Musical Director Leo Carusone have paid particular attention to allowing Mr. Dvorsky and Mr. Trimmer to let themselves really loose on Some Enchanted Evening, This Nearly Was Mine, Younger Than Springtime

Then there are  very nervous times in ACT II, as de Becque decides to join Cable on the mission.

They fly out of the base in a staging that suspends the audience’s belief by imaging with spotlights and overhead roar of Lockheed-alike airplane props growling up  into the night with wing lights flashing overhead. Highly imaginative stage by  WBT’S light man, Andrew Gmoser and set designer, Steve Loftus.

The radio transmissons from the radio shack build the suspense. Will the couples reunite?

Will Nellie overcome her fear of being able to love children not hers?  Will Lieutenant Cable accept Liat?

South Pacific creates a real feel to the military of the World War II era; Bookman  Joshua Logan, who served in the military in World War II was able to write military types and military dialogue that delivered how the Navy was back in that crucial time.

South Pacific delivers  the suspense of a movie; the feelings that we love feeling and hate feeling and the entire cast just sends you out with tears, pride, good feelings, and appreciation of that time.

South Pacific plays through January 25. For ticket information go to www.BroadwayTheatre.com or call  the box office at  914-592-2268. Try the brand-new dinner selection, sliced ham, it is delicious!