↓
Home Menu ↓
Home→It’s the hearing that never ends: 700 PLUS Fill WPHS Auditorium to Comment on FASNY. HEARING RESUMES WED 6:30 P.M. 30-35 to Speak. ENTER Army Corps of Engineers Studying Site to See if it has Jurisdiction on Plans 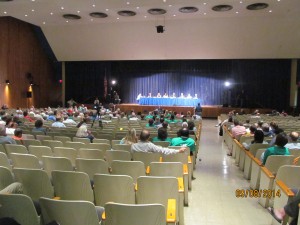 The FASNY Hearing Monday Evening as of 9:45 P.M. Crowd had dwindled by half. 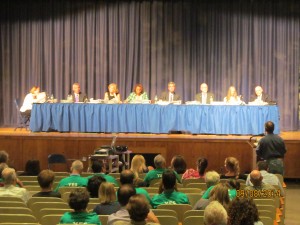 The Common Council listened to speaker after speaker. Here the always passionate Dan Seidel beseeches the Council to vote the proposal down.

The FASNY SPECIAL PERMIT HEARING on the French American School of New York site plan for a 5-building campus on the Ridgeway Country Club was held open by the Mayor and the Common Council because thirty or more persons still had not gotten the opportunity to speak by midnight last night.

The Office of the City Clerk confirmed to WPCNR the hearing will be continued Wednesday evening at 6:30 P.M. However, the City Clerk office also said when WPCNR asked if more could speak, that  no additional persons may sign up to speak other than those who did not get to speak Monday evening. The Special Permit/Site Plan hearing was suspended at 12:30 A.M. this morning.

Those who were on the list to speak are invited back to White Plains High School at 6:30 P.M. Wednesday to resume the action.

The French American School of New York Special Permit/Closure of Hathaway Lane hearings began approximately at 6:30 PM Monday evening with about  700 in attendance. Observers said the hall appeared full which would mean approximately 900 people were in the building. (WPCNR arrived about 9:30 P.M.). Ron Rhodes, one of the speakers told WPCNR  that at the outset of the Hathaway Lane hearing, the Mayor said the process would next include the Common Council coming up with questions that want the French American School of New York  to answer, and FASNY coming back to the Council with answers.

Rhodes also pointed out that Anne Bobroff-Hajal representing EcoNeighbors,  speaking about 11: 20 raised the issue that the Army Corps of Engineers has indicated to her that FASNY had not been as clear as they should have been in explaining the project. She pointed out that the Army Corps of Engineers should have analyzed the site to see where foundations could be put for the project buildings or homes taking into consideration the underground tributaries of the Mamaroneck River.

In July, she told WPCNR the Army Corps thanked her for drawing their attention to FASNY’S project, and proceeded to request the plans from the French American School.  Bobroff-Hajal reports to WPCNR that the Army Corps cannot determine whether they have do have jurisdiction without doing a study of the property.

That process of gathering material to determine jurisdiction, according to material just received from the Corps of Engineers by Ms. Bobroff-Hajal, is now underway.

According to Ms. Bobroff-Hajal, the Army Corps of Engineers does have jurisdiction over the property and “is very interested” in the project plans because the corps is now doing a detailed study of the Mamaroneck River and Sheldrake River water basins. Bobroff-Hajal said that the Army Corps of Engineers map shows underground streams heading out southwest from the pond on the previous golf corse property, which run right across where FASNY plans its construction. One of those streams is not shown on the FASNY public plans.

Bobroff-Hajal told WPCNR she had contacted the New York State Department of Environmental Conservation and they were not interested in looking into the project.

However the Army Corps was very interested when she contacted them in July, because, she said, the Corps told her the Army Corps “relies on citizens to inform them of projects that are planned in their cities. Otherwise,” she said,  “they have no way of knowing whether developers proceed with a project or not.”

A letter from Zarin & Steinmetz, FASNY attorneys,  provided by Ms. Bobroff-Hajal dated August 25 (last month) acknowledges Army Corps of Engineers efforts to collect information for the Corps study of jurisiction, FASNY attorneys to the Army Corps of Engineers in response to the Army Corps requests for the FASNY Plans, cited the reason why FASNY feels the former golf course is not subject to Army Corps jurisdiction, saying that streams that have been covered over (in this case by creation of the golf course), are not subject to ACE jurisdiction. Though that regulation has expired.

WPCNR has asked for a statement from the French American School of New York on why they did not explore invoving the Army Corps of Engineers in analyzing the water sensitivity of the property, and whether the Corps feels a study is needed.

WPCNR has asked for a statement from the City of White Plains press office as to why the city’s battery of environmental consultants had not pointed out to FASNY that the Army Corps of Engineers does have jurisdiction over the property three years ago before the process began.

Approximately  70 speakers  were scheduled to speak throughout the evening. The crowd had dwindled to 125 by  11:30 P.M., when the Special Permit hearing was still going on. Applause greeted statements pro and con, reminiscent of a congressional State of the Union message.

This was the largest gathering observed over a land-use issue in the city since the New York Presbyterian Hospital  hearings in the three years 2000 to 2002. That land use controversy resulted in an Article 78 proceeding against the city which the hospital won on the grounds that the city had refused to refer the project for review to departments. That Article 78 decision forced the city to review the Hospital’s proton accelerator project which was eventually approved but the hospital abandoned the plan.

Old grounds for rejecting the current FASNY proposal under review for the last 3 and a half years were repeated by opponents with the majority of comments advising the Common Council of White Plains to reject the school proposal to build a 5-building campus on the former Ridgeway Country Club.

Objections previously raised were that increased traffic would overwhelm North Street and the Gedney Farms  Neighborhood; real estate values would decline;  the project did not fit in  with the neighborhood.

New objections were also raised by Ron Rhodes that the project violated a number of sections of the Comprehensive Plan of the city, and called for the Council to reject the project. Rhodes concluded his statement, saying, “If you follow the (city) law and reject FASNY…you would show you can’t be pressured by outside influences.”

Robert Stackpole, noted that the alternative posibility of building 45 homes did not conform to the usual standards for viable subdivisions. Mr. Stackpole also stated that there was a “billinonaire owner” who was ready to purchase the former Ridgeway Country Club again and “bail the French American School” out.

A realtor in the hearing of the Special Permit suggested the French American School could purchase or rent the Good Counsel property as a way of moving to White Plains without occupying the Gedney Farms neighborhood and continuing to lower the neighborhood  real estate value. She warned the city that Gedney neighborhood home prices had declined some 20% since the school had announced its intentions, and would continue to lower. She said if the city voted in favor of the project it would face certain tax assessment challenges from those homeowners who remained.

One fourth of the crowd was clad in green “YES” shirts supporting The French American School Proposal.