↓
Home Menu ↓
Home→The Musical of the Century! WBT Ragtime revival is The Rage! 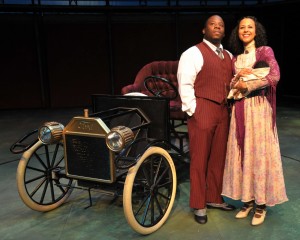 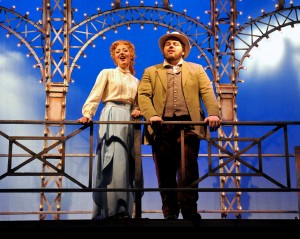 Not One, But Two Romances Ladies and Genlemen, that Tug Your Heart Strings. Victoria Lauzun as Mother and Joey Sanzaro as Tateh. How they come together is just one of those things

Ragtime tells America’s story as touching, heart-breaking and as dramatic as it gets:

The sound of distant thunder
Suddenly starting to climb…

It was the music
Of something beginning,
An era exploding,
A century spinning
In riches and rags,
And in rhythm and rhyme.
The people called it Ragtime…
Ragtime!
Ragtime!
Ragtme!

I have been reviewing shows at the Westchester Broadway Theatre for 14 years.

The Standing Ovations Studios rambunctious, irreverent, in-your-face overwhelmer of a revival of the 1998 musical Ragtime , that officially opened Friday night in Elmsford is the best production WBT has ever presented that I have seen. Easily it is the most involving and emotionally connecting.

Ragtime gives  theatre goers all this top-of-the-line 40-member cast has—right from the anthem Ragtime .  The anthem  I quite above   introduces the colors of America at the turn of the 19th century from white New Rochelle residents lofting tennis balls  to immigrants from Latvia, Ireland,and Blacks up from the south from the Robber Barons and architects of America’s success to  all seeking success in America.

It never lets up on the audience from its hour and 20 minute first act to its 55 minute second act at rolls like an express train of emotions…it overwhelms with 32 songs—by the second time Broadway composing team of Composer Stephen Flaherty and lyricist Lynn Ahrens who executed a 4-song  audition score for original producer Harold Prince and beat out 7 other  4-song writing teams to win the task of writing this score. The score won a TONY as Best Original Musical Score in 1998. Their first hit was Once On an Island in 1990, then the musical score for the Disney movie Anastasia, followed by their winning the competition to compose Ragtime.   Their latest work, Rocky, The Musical premiers next Friday in New York City. 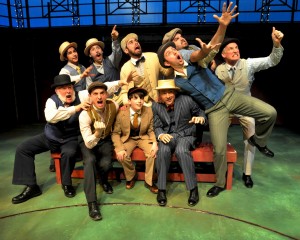 Part of the Ensemble sing What A Game at the Polo Grounds in New York. Made possible through the ingenious manipulation of set , music and choreography

Director John Fanelli and Set Designer Steve Loftus takes us back to the future with clever use of an arched set and revolving stage that simulates assembly lines in Detroit, the Polo Grounds, a court room, docksides.  We even have a model T Ford. 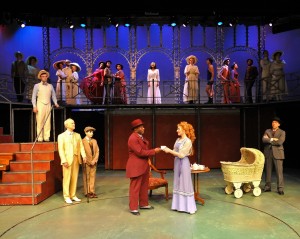 While choregrapher Greg Gramham has created ensemble numbers that do not look like dances they actually move the plot. And move it does. In a musical of this length and breadth the scenes never lag, you never yawn during songs that take you by the heart and soul.  The audience was enthralled, brought to tears, warmed, shocked, they connected with the characters  through the magical book of Ahrens & Flaherty put E.L. Doctorow’s novel on the stage.

The musical explores how prejudice against blacks and immigrants and denial of justice from by the suburban community of New Rochelle results in tragedy that turns Coalhouse, the ragtime musician into a violent activist.

FaTye,  a fixture with Standing Ovation Studios,  gives his best performance I have seen him do. When he reconciles with Sarah played by Brittany Johnson, his girl, who has taken refuge in a New Rochelle family home…their duet Wheels of a Dream warms the heart, and their chemistry delivers. The tragedy inflicted upon the couple tugs on your heart and will not be soon forgotten.  Their second duet, Sarah Browneyes gives breathing life to what two people mean to each other.

Joey Sanzaro below plays Tateh, a Latvian immigrant with his daughter,  delivers  as believable a role in an ongoing cameo scenario I have seen in a long time. He is touching, tough, self-starting, showcasing the palette of skills demonstrated by the immigrants who came with nothing, and made something of themselves.  You root for him.

The heroine who is the other storyline in this massive juggling of historical themes that hit home today is Victoria Lauzan above whose diamond contralto  puts the heartbeat into the “connectors” of the show (and believe me all the songs are good and connective).  From her Goodbye My Love (to her husband who is leaving on a polar trip with Admiral Perry), to the disdainful What Kind of a Woman (sung when she finds Sarah’s baby abandoned in her garden in New Rochelle, and she decides to take the baby in). Then Ms. Lauzan as she gradually realizes how sheltered she has been delivers a haunting anthem in the bring-down-the-house Second Act:  You Can Never Go Back to Before. which she sings with Mr. Sanzaro (above) 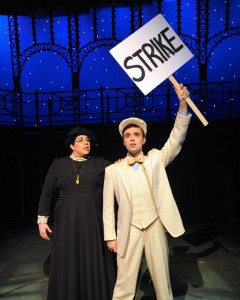 Nadine Zahr as Emma Goldman (left) doing another deft cameo roll as the anarchist with one of her recruits, Todd Ritch, the younger brother who is inspired to fight for justice for Coalhouse and the oppressed workers

The audience loved this show mounted as best  as any I have seen at the WBT. Only seven Actors Equity Members grace this 40-performer ensemble and you would never know it.

The orchestra laid a seamless ragtime beat into most of the soungs, and laid an unobtrusive supportive bed for the songs, that performers sung with a clarity that was as professional sounding as you could wish for. Even the children performers you could understand.

The audience rose to its feet. The Show had them at first spotlight.

Ragtime lives for all-time through May 4. Cautions: gunshots, violence, emotional situations  that can affect younger children and adults. But that’s our country folks.

Don’t take my word for it. After the show ended some comments overheard by yours truly: “Just incredible,” “what a great show.” The speakers appeared so entertained they did not want to leave.They just stood there saluting this effort. 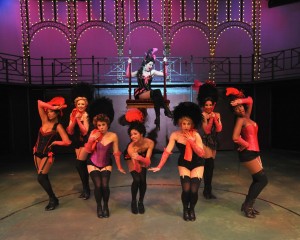 It is as Ms. Nesbit (Cali LaSpina of Scarsdale, above, “the Wheeeeeeeeeeeeeeee! Girl” shown performing “The Crime of the Century” with vampy, impish delight) would put it,

“It’s the Musical of the Century” 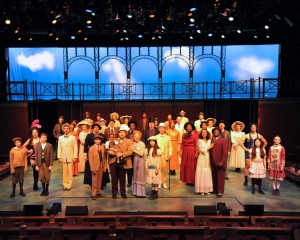