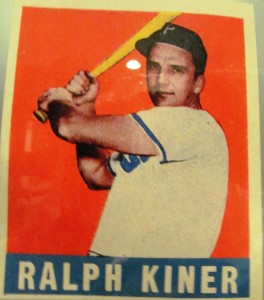 WPCNR VIEW FROM THE UPPER DECK. From Larry The Dutchman. February 6, 2014:

Some of you may have read about Ralph Kiner’s passing.  For Mets’ fans, he will be remembered as one of the original voices of the Mets, along with Lindsay (loud sports jacket) Nelson and Bob Murphy.

His ratio of homeruns hit to at bats is second only to Babe Ruth and he lead the National League in homeruns for seven years in a row.

His bad back caused this former WW2 Navy pilot to have his baseball career limited.

He was, at one time, the highest paid player in the National League (at $30,000 per year) and was in the top four of his day, behind Joe DiMaggio, Ted Williams and (I believe) Hank Greenberg.

The name of his postgame show was “Kiner’s Korner”, a reference to the section of Pittsburgh’s home field (Forbes Field) where Ralph would typically hit his homeruns.

Ralph’s commentary on television doing Mets games was always enlightening and ruthlessly honest. When a Met made a bad play. He said so. You always learned something new about this fascinating game listening to Ralph and his easy-going style on the postgame shows made losses easier to bear and wins so much sweeter.

Ralph was quoted in the book “Speaking of Baseball” in the section Then and Now, on today’s players compared to yesterday’s, it is a quote we all should take to heart:
“I think one of the most difficult things  for anyone who’s ever played baseball is to accept the fact that maybe the players today are playing just as well as ever.”
He also said: “Home run hitters drive Cadillacs and singles hitters drive Fords.”
So long, Ralph , I’m pouring  a glass of Rheingold Extra Dry in your honor.