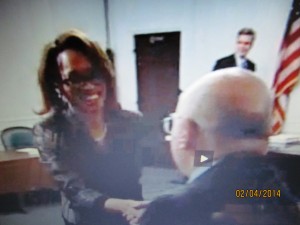 Nadine Hunt-Robinson, being congratulated by Councilman Dennis Krolian after her swearing in to Benjamin Boykin’s former Council seat. She will serve through 2014, and if she wishes to serve in 2015,(the last year in Mr. Boykin’s current term, she must run in a special election. 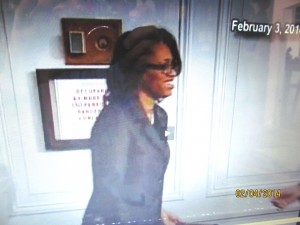 Ms. Hunt-Robinson coming up to be sworn in by Mayor Thomas Roach Monday night.

Ms. Hunt-Robinson was approved by the Council and will fill the seat until a special election can be held. 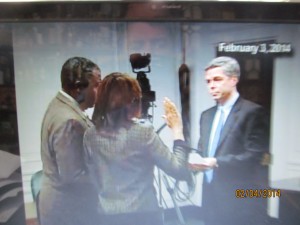 Ms. Hunt-Robinson, with her husband, being sworn in by Mayor Thomas Roach

According to Liz Shollenberger. Chair of the White Plains Democratic City Committee, Ms. Hunt-Robinson grew up in Mount Vernon, graduated from Villanova Law School in Philadelphia, and is employed by Zurich American Insurance Company, specializing as an Environmental Team Manager who handles remediation of toxic and environment-damaging incidents and disasters.

She is active in the Big Brother Big Sister program, and a Board member of Alpha Kappa Alpha Sorority.

Ms. Hunt-Robinson, speaking to WPCNR this evening said “I’m very honored  to have the opportunity to serve my fellow citizens.”

She said her main objective on the council would be “to preserve our city for the next generation and leave a legacy, preserve the character of the city.”

She described herself as “I’m a very open person” who analyzes and examines the issues.

Asked whether she sought the nomination, or was approached she explained she was definitely approached by the Ministers Fellowship Council of White Plains, an organization of ministers of the city who asked her to accept the position replacing Mr. Boykin if offered.

She said she was interviewed by all of the White Plains Councilmembers who tonight voted her in to fill Mr. Boykin’s shoes.

She described her present position with Zurich American Insurance as  handling claims from clients faced with traumatic environmental emergencies , liaisoning  and aiding them in putting together the services needed to  get the client functioning normally again.

Ms. Hunt-Robinson has two decades of experience in the insurance business, joining Zurich in 2005. She was appointed Assistant Director of Environmental Claims in 2008. She was inducted into the Federation of Defense and Corporate Counsel in 2010.

Mr. Boykin, her predecessor on the Council was elected to County Legislator of District 5, in November of 2013, replacing William Ryan, creating a vacancy on the Council. The Charter provides the Common Council may choose an interim appointee to the seat who is subject to run in a special election the following fall, to win the seat for the 2015 year of Mr, Boykin’s unexpired term.