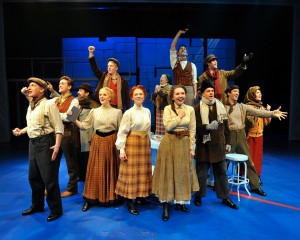 The new and improved 2014 Titanic set sail with majesty, and unfurled whip-snapping pennants of hope on the emotional voices of a strong ensemble  and haunting staging on the high seas of the Westchester Broadway Theatre Thursday evening .

The Tony Award winning musical of 1997 has been retrofitted anew by its composer and lyricist, Maury Yeston and staged with inventive direction by Don Stephenson. The old girl is sailing jaunty and proud on the songs that in virtually every number uplift the human spirit – the reason we see musicals in the first place.

Seamless musical interludes to render the gaity of the fated passengers and crew  the cold beauty of the North Atlantic  starry night, the high hopes of all the classes of all the souls who sailed aboard  the most famous ship of all time  102 years ago into eternity. Subtle  lighting creates eerie special effects such as a serving tray sliding across a ball room to indicate that the ship is really sinking.

The leading lady of this show is the spirit of the Titanic herself. You are aboard her, and thankful  you are in the seats and not on the decks as she sails through the starry night.

The movie gave you one romance, this Titanic gives you four, each cameoed spot-on by Patricia Noonan as Caroline with her beau Noah Plomgren as Charles Clark who charm the audience with  I Give you my Hand, (they are running away on the Titanic to New York).The sassy, spunky Sarah Charles as Kate McGowan and John Lanfley  playing Barrett give us a tempestuous charming Irish couple that meet shipboard and do a very touching number under the starry North Atlantic night, The Proposal.

Couples three and four are Kay Walbye and David Studwell playing the famous lifelong couple, Ida and Isidor Strauss, they shine in the melodramatic lifeboat fairwell scene in act two, Still—the bring-down-the-house number of the show.

Rounding out the romantic quarter are the social climbing Alice played by Donna English with excellent comic timing who enjoys the first class salon appointments even though the ship is sinking and her long-suffering hardware store husband,  Edgar, deadpanly drolly played by Philip Hoffman. Nothing he does is ever good enough for her. Long time marrieds will find their just-right nuances very familiar  even their duet I Have Danced  is a gay but ironic tune at the dance on the promenade deck at the close of act one. 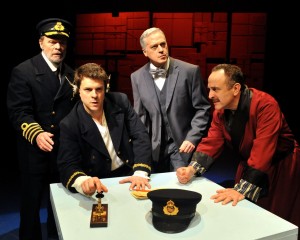 A strong quartet of key personalities captains this ship. The architect, Thomas Andrews (above, second from right) is played tragically by Tom Hewitt and he interplays splendidly with Adam Heller (far right) who as the villain of the Titanic tragedy, J. Bruce Ismay, chairman of the White Star Line, stage a brilliant “blame game” scene in Act II that I have never seen portrayed in any Titanic movie.

The tempers of Andrews and Ismay flare. The panic and sense of despair is drama that grips as few musical conflict scenes do the way these two stage it. William Parry (Far left) the tragic figure of the Captain, Edward J. Smith deserves a salute from this passenger. Jeremy Ellison-Gladstone is the radio operator seated who makes the most of his plaintive sending a romantic message from a ship’s stoker. Lots of melodramatic moments that grip you in this musical!

Hewitt’s hits Andrews’  despair dead on  as he views his plans of the Titanic and sees how a slight design change could have prevented the accident is gripping. He sings out the technical solution as he describes the ship’s fate as it is sinking..

The sense of suspense leading up to the striking of the iceberg is brilliant!  There is the lookout in the crow’s nest, there is the helmsman at the bridge. Suddenly the iceberg appears reminiscent of the scene in Jaws.  The awe of what is about to happen is compelling and you have to see it.

The loading of the lifeboats is touchingly rendered highlighted by the the singing of We’ll Meet Tomorrow. 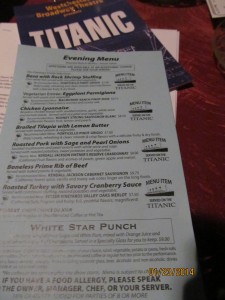 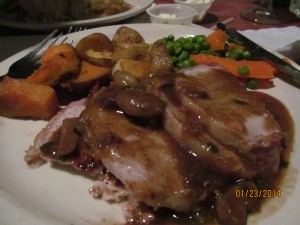 You will dine on dishes that were served to the passengers of the Titanic, including Roasted Pork with Sage, mushrooms and Pearl Onions (shown above, superbly cooked, moist, I felt like an Astor); Chicken Lyonnaise, and Roasted Turkey with Savory Cranberry Sauce and Basa with Rock Shrimp Stuffing. These dishes a departure of the usual WBT fare is a great touch .