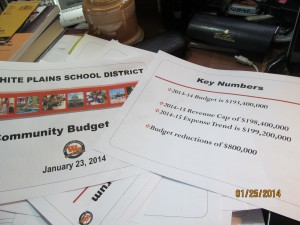 The first School District Community Forum held  Thursday evening at the White Plains High School to start the school district budget process introduced a 2014-15 possible school budget of $199,200,000 without settlement of the White Plains Teachers Contract and year to year increase of 3%, double the rate of inflation.

Fred Seiler, Assistant Superintendent for Business in his Power Point show noted that in order for the district to present a budget under the the 1.5% Tax Levy Cap, the district would have to cut $800,000 or  a half percent of the total projected expenditure of the budget.

WPCNR calculates this would mean roughly the cutting of  approximately  20 employees low on the pay scale and longevity ranks, depending on how many retirements might be taken in the coming months.

Potential new school aid of $1,000,000 was projected without building aid.

All exemptions from the 1.46 %  increase allowed in the tax cap levy have been figured.

The Governor’s tax levy cap once again is apparently being followed to the cent by the City School District with no intention of trimming expenses any more than they absolutely have to do.

The effect of the Governor’s tax levy the last three  years it has been in effect has not had the effect of cutting the White Plains School Budget at all.

Instead the district keeps as much of their programs, administration and teaching staff in place as they can without actually taking creative cuts to cut more expenses than they absolutely have to cut.

The public is invited to submit comments leading to the next and final budget forum on March 19 on how the district should cut their $800,000 to present a budget in compliance with the tax cap to reach the “cap compliant” budget of $198.4 Million.

Of course more school aid from the surplus that Governor Andrew Cuomo is touting could lower the tax rate if the school district chose to do so. Last year, when more school aid was received at the last moment, they just increased the budget to $193.4 Million and kept the tax rate where it was $583.21 per $1,000 of assessed valuation.

A problem in all the calculation is the labor impasse with the White Plains Teachers Association. A settlement on wage increases for teachers at the top of the pay scale (who are ineligible for step increases) is the sticking point.

Teachers still in the step raise sequence receiving those steps this year as well as perhaps raises or lack thereof in the step increase schedule is a thorny issue. With more than have half of White Plains teachers last year not covered by the step, this is the bulk of the teacher salary total, and such an increase  plus retroactive pay if negotiated as part of the settlement would have to be covered some how in the 2014-15 budget, or start in the 2015-16 budget–which will be a whopper.

Next year, if the school district continues its rollover spending ways without trimming substantially the district could increase $10 Million.

Comments on how to cut the budget should be directed to the White Plains City School District, 5 Homeside Lane, White Plains NY.