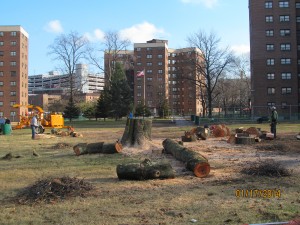 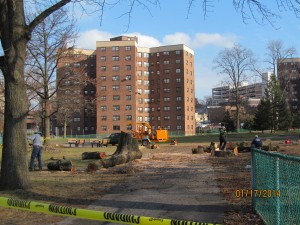 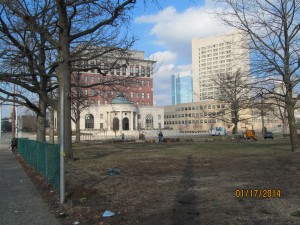 There was no ribbon-cutting, no celebration. Just the whine of saws heralding the coming Winbrook of the 21st century today.

The revitalization of Winbrook quietly got underway today with the removal of trees from the Northwest corner of the Winbrook complex, the White Plains Housing Authority public housing buildings dating back to the 1940s. The lot is being cleared for the first of an undetermined number of buildings (originally conceptual plans had 7 buildings being built with retail shops along Lexington and Fisher Avenue opposite the Federal Courthous) that will replace the 1949-50 era-built vintage apartments home to 450 families building by building, with no one being displaced.

WPCNR has learned that Jonathan Rose Associates, the builder has acquired financing for building one building at this time. WPCNR awaits a response from Jonathan Rose.

The first building to be built on the site being cleared (shown in the photographs above), will house a community center featuring a training center to prepare youths for positions in the restaurant business, according to Mayor Tom Roach, who made the comment at the Tuesday meeting of the Council of Neighborhood Associations. At that meeting, Mayor Roach did not say the project was starting this week.

Two residents sitting on a sidewalk bench told WPCNR this afternoon, the crews shown above removing the first of the trees needing to be cleared, had been here all week. The two ladies WPCNR spoke to said “they appear to be on a fast schedule, starting construction January 24.”

Today shows  the first visible signs of actual action this reporter is aware of.

The Thomas Slater Center, holding a meeting this afternoon when WPCNR dropped by for information on “the big start” did not know about the Tuesday meeting and were unaware of the quiet start.

At City Hall, WPCNR inquired as to what was going to take place at the meet Tuesday, whether this meant that Jonathan Rose Associates, the firm that was selected as the Housing Authority partner in the project, has acquired financing for the rest of the building, and what the timetable was for completion, and selection of tenants who would be moved, but was told John Callahan, the Mayor’s Corporation Counsel was in a meeting and would get back to WPCNR.