↓
Home Menu ↓
Home→Irresistible Singel is Oliver! Inspiring Lucy Braid as Nancy! Tugs Heartstrings. Tears You Up. Cheers You Up in Schmaltzy Tasty Concoction 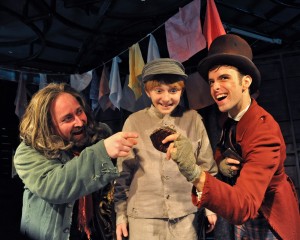 Starting with the towheaded 7 year old huggable, wonderstruck Oliver, 7 year old Brandon Singel, the audience just loves him to pieces, as he wanders about rough and tumble, desperate and humble Victorian London. That’s John Anthony Lopez as Fagin, the pickpocket boss, on the left, and Todd Ritch on the right as The Artful Dodger.

It is a faithful, win-you-over company of energetic young charmers who deliver an emotional musical memory of schmaltz, hope and entertainment for all ages.

The old favorites wind into life in this Tony Award-winning relic, from the company of orphans at Mr. Bumble’s orphanage singing of Food,Glorious Food  (when master Singel asks for ‘More” to  the little charmer, asking and singing the musical question, Where Is Love when he is turned out into the street by his funeral parlor employer to the pickpocket recruiter, Fagin. 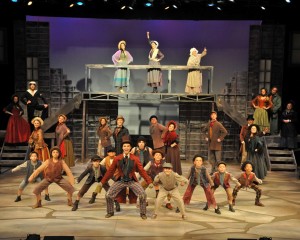 The Artful Dodger (Todd Ritch above)) welcoming Oliver into Fagin’s pickpocket gang with a rambunctious tempo Consider Yourself (One of the Family) Oliver settles you in your seat like an old friend you’re feel comfortable with whom you have not seen in a long time. He’s changed but you love him anyway. 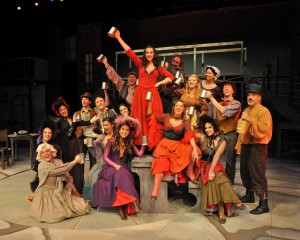 Lucy Braid (at top of picture) leading Oom Pah Pah! above, in her Westchester Broadway Theatre debut as the doomed Nancy, who with Oliver, is the focus of the show and really sparkles.

She loves Bill Sykes, a ruthless criminal whom she loves inexplicably. Braid and Cali LaSpina performing a rollicking It’s a Fine Life  get the production rolling,  explaining the glamor side of pickpocketing and a ladys’ rolls in the underworld, doing dirty laundry.

Braid’s Nancy starts the second act with smashing version of Oom-Pah-Pah. She further endears herself to the audience by making As Long as He Needs Me an anthem, a lament, a definition of the mystery and affliction of  unrequited love any woman who has ever loved a difficult man will identify with. Braid’s stalwart proud heartbreak tears you up the way she wrangles this signature song.  You will be reading Ms. Braid’s name in many a playbill in the years to come. Braid shines on her other big song, the tear-jerking song of pathos rendering the definitive song of those without hope that society has cast aside,  Who Will Buy?

Act II finds Oliver messing up his first attempt at pickpocketing, being caught by the London Bobbies and remanded to a long lost relative and it looks like our resourceful scamp who appears to let things happen to him with just the right amount of innocent pluck is going to be all right. But the malevolent Bill Sykes is looking for him because Oliver can identify him to the police. Sykes  is played over-the-top ugly by  Brian Kinsky, with a truly evil sense, scary and gives young audiences an insight into what people who behave badly are really like. Sykes kidnaps Oliver in an attempt to silence him

Nancy intercedes to protect Oliver at her peril and is an appealing heroine.

John Anthony Lopez is a rascally Fagin (the leader of the pickpocket gang) with his big number You’ve Got to Pick a Pocket or Two,  a crowd pleaser. Young persons seeing Mr. Lopez’s unseemly worship of  money and the way he exploits his pickpockets get a valuable insight into what bad people are really like: they use you under the premise of helping you. Fagin is totally unsympathetic and this is the strength of Mr. Lopez’s performance. Fagin may be cute but even a young mind can see the selfishness in Mr. Lopez’s Fagin. 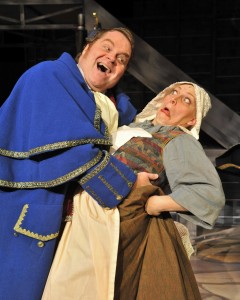 Mr. Bumble and  Widow Corney are a great comedy pair (John Treacy Egan and Regina Singel, above–Oliver’s real life mom) as the very nasty orphanage overseers.  Their I Shall Scream is a hoot.

Parents Note Content: Threatening physical conflict between the Sykes and Nancy characters. There is some light playful innuendo.There is gunplay