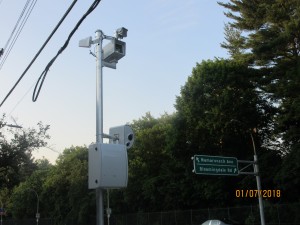 A sharp-eyed motorist spotted this new pole with bulky boxes on it some 100 feet from the Bryant Avenue and Mamaroneck Avenue intersection, one of White Plains busiest, most aggressively contested intersections. 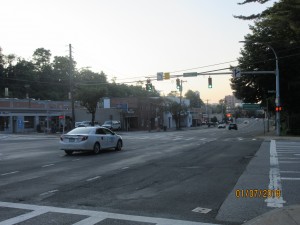 Can you spot or first red light camera in this picture?

Upon inspection WPCNR noticed it was flashing at certain intervals, with bright strob flashes, perhaps at “rights on reds.” or aggressive left turns.

There is no announcement on the City of White Plains website.

Now since we recorded the strobs flashing, apparently taking a picture, it is not known whether this is a single installation being tested or what.

It is well known the city was racing to get the red light surveillance system in place by the start of this fiscal year to help the steady sag in the White Plains sales tax revenues headed for the sixth straight year of decline if the June figures do not match last June. Though the City administration has said they want to install the red light cameras to increase safety at the intersections.The city has also quietly raised parking rates.

White Plains is such a quiet city. At this point, motorists do not know what the fine for running a red light will be; they do not know if they can still make rights on reds, rights on yellows, lefts on yellows. Or if any part of the car tailend or front in the intersection will earn them a “red lightee.”

Perhaps the camera posts should be painted a bright red, yellow and green so motorists can know when they are on “Candid Red Light Camera.:” Or perhaps paint it to represent a police officer, Like (“Officer Joe Bolton) with a camera, as we all know when we see a policeman or police car, we slow down.

If you do not advertise the cameras existence, it is my opinion you are just trying to net more tickets, and actually creating a more dangerous situation.

I eagerly await a city produced video “Red Light Cameras and You: How to stop look, watch and brake when the light turns yellow” something like that.

I have never seen a video of that explaining the “ticket trigger.”

There also should be a video on how the tickets are issued; and in light of the scofflaw fines persons running cashless tolls experienced–what the rules are for contesting the remorseless red light camera.

I for one will assiduously avoid going into town using any intersections with these cameras.

It would also be helpful if the city published the intersections picked for these “Public Safety Installations.” the dates they will be ticketing for real. I believe there was supposed to be a three-month amnesty period.

But of course that should have been in the press release, talked about in a press conference with demonstrations of a police car demonstrating how to handle the yellow or the green light from maneuverability standpoint. That would indicate an interest in safety. Perhaps driver education classes and driver schools should be addressed.

I volunteer to emcee the videos, as a public service gesture.