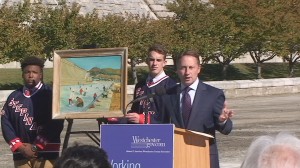 WPCNR COUNTY CLARION-LEDGER. Special to WPCNR from the Westchester County Board of Legislators. March 1, 2017:

On Tuesday, the Westchester County Board of Legislators (BOL) Committee on Infrastructure reviewed County Executive Rob Astorino’s proposed ice skating rink to be located at the Kensico Dam Plaza in Valhalla. (Rendering shown below.) 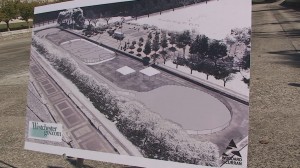 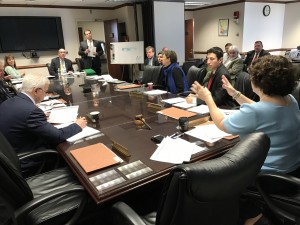 County Legislator Mary Jane Shimsky framing a question at the Committee on Infrastructure meeting on the Ice Rink proposal (Photo, Westchester County Board of Legislators)

Legislators, including Infrastructure Chair MaryJane Shimsky (D-Hastings-on-Hudson) asked tough questions about the proposal’s economic viability and its wisdom given the many competing priorities in the County’s parks and recreation budget.

The Committee discussed the financial impact to taxpayers of the $24.7 million project, which would be financed through bonding, with repayment ranging from 15 to 25 years. The Biedermann report anticipated annual operating losses of approximately $400 thousand, based on the best case attendance scenario.

Among many other specifics, discussed were the physical plant which would include an elliptical shaped recreational rink, the refrigeration and drainage systems, and a new building to hold equipment including two ice resurfacing machines.

The necessary lighting and bleachers for the ice rink are currently proposed to be brought in on a temporary, as-needed basis. The costs for these items had not been factored into the fiscal analysis.  Lockers may have to be added to the proposed concession building upgrades, at an additional cost.

A number of questions were posed by Legislators; these will require follow-up in the coming weeks.

“While we learned some things about the scope and costs of the County executive’s proposal today, many more questions were raised which we will need to address. Based on proposed capital costs and Mr. Beiderman’s initial projections of operating debt, the annual cost to the county per skater may range as high as $108, while the per-skater revenue will be closer to $14,” said Shimsky.

“While we all agree that public parks are an important part of the quality of life in Westchester County, I’m not sure how the County Executive reconciles taking on this project. He has closed popular recreation assets like the Sprain Ridge pool, forgone critical repairs and maintenance at the historic crown jewel of our Parks system, Playland Amusement Park, and has deferred maintenance at other parks, all because he claimed that taxpayers could not afford them.”

“I have yet to be convinced that we should neglect existing recreational facilities, and ignore other fiscal problems in a 2017 budget that is already falling behind revenue projections, in favor of pursuing yet another skating rink in Westchester County.  This is not the move of a fiscal conservative,” concluded Shimsky.