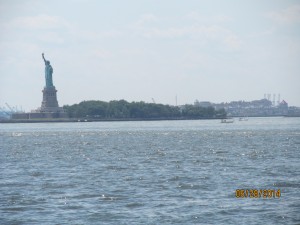 The issue of Executive Orders by President Trump Friday leads to an all too sad conclusion:

America is no longer the “go to” place for dreamers, people in trouble, children, oppressed  men, women and their children, and God knows the misery individuals face around the world as a result of pandering to Americans’ fear of the different..

That America just disappeared yesterday with a pen stroke.

The Statue of Liberty has been the personality of America since France gave it to this nation in the 19th century.

The erstwhile “Lady of Liberty”  is a relic of a time when America stood for something. At the base of the statue there is this poem:

Not like the brazen giant of Greek fame,
With conquering limbs astride from land to land;
Here at our sea-washed, sunset gates shall stand
A mighty woman with a torch, whose flame
Is the imprisoned lightning, and her name
Mother of Exiles. From her beacon-hand
Glows world-wide welcome; her mild eyes command
The air-bridged harbor that twin cities frame.
“Keep, ancient lands, your storied pomp!” cries she
With silent lips. “Give me your tired, your poor,
Your huddled masses yearning to breathe free,
The wretched refuse of your teeming shore.
Send these, the homeless, tempest-tossed to me,
I lift my lamp beside the golden door!”

As I read it over just as I posted it. I really read it. It brought tears to my eyes.

That America is over. My America is gone. In a few strokes of a pen a very mean person shattered America’s reputation, its pride, its courage, its mission to the world.

It is not coming back ever the way it was. Maybe long after I am dead it will.

Immigration was always restrictive to a degree: persons coming to Ellis Island at the time of the great migration, were not admitted if sick; if they had no place to stay or family, if they could not support themselves.

And, of course the predominantly “blue blood” USA State Department in the 1930s and 1940s refused to accept Jews into the country for most of World War II,(an absolute prejudiced and genocidal policy).  The U.S. government was reluctant even to accept one ship of them until Reporter Ruth Gruber’s photographs of a jam-packed ship full of Jews that every port in the Mediteranean Sea turned away, shamed the United States into doing so (despite evidence of the holocaust).

By the way Holocaust Remembrance Day was recognized Friday.

What callous timing by the new President.

It is ironic and poignantly melancholy that President Trump signed these orders to hold back the tide of  refugees when the holocaust was remembered, (as follows according to The Huffington Post):

He is proposing to build a wall between Mexico and the United States.

When immigrants arrived here 100 years ago they faced the same prejudices from the “Americans” who were here—the descendants of the religious founders from England who left that land because of repression — who survived mainly because Native Americans helped them.

Those that came in the nineteenth and twentieth centuries faced resentment by those property owners who had already made their mark. The new immigrants were called harsh, humiliating names (you know what those names were) and they settled in neighborhoods of their own kind. The East Side of Manhattan, the West Side, Mulberry Street. Chinatown.

New York also accepted Negros from the South. It was a tumultuous time. The immigrants were disliked because they were different,  did not  speak English, had different customs, whatever.

Somehow we always dislike the “different,” make fun of them. Does it make us feel good to do that? What is there about that feeling? Or worse.

But, now America is afraid of refugees. Afraid of helping starving children without a home. Since when?

Now the intent of these restrictions above that Mr Trump has put out executive orders on or will, is to protect us.

Trump inherits a government that can’t secure its own secret information. Hopefully, Rudolph Giuliani will change all that.

(See Eric  Snowden “Take Out”, Hillary Clinton hacked emails, and that 39 page “From Russia With Love” dossier, is it real or is it not? And we don’t know? Where is James Bond when you need him? They’ll never investigate that dossier.)

To do all this that the Trump Administration proposes, as well as the deportation initiative,  I think that is going to be very hard to do and set up structures and organizations to do that.

But, more to the point: this is not the America I once knew.

The heartbreak, the deaths, the despair the refugees sitting on our borders are now going through is worse. The future of those on route are now faced with, I cannot imagine.

Well, I hope everybody feels good and more protected, this morning. I hope you do.

Someday you will need help and there will be nobody there. You will know what it means to find no compassion.

Now the refugees of the world have nobody either thanks to the Trump  Executive Orders.

Perhaps this new administration should build a monument to what it stands for– a statue of Donald Trump to replace the Statue of Liberty.

In 7 Days as President he has shattered the image of America across the world. He has shut “The Golden Door,” ignoring the truth that immigrants built this nation, the railroads, the bridges, the factories, the farms. We can only hope that his assembled team of “The New Robber Barons,” who in the last 17 years have created financial misery while enhancing their own wealth, and now have shown their true nature.

As a woman told me yesterday in a conversation about a news event, in a totally spontaneous statement:

“I want my America back.”

I could not have said it better.

And, until it means something again,  send the Statue of Liberty back to France. It no longer means anything, replace it with a statue of Donald Trump.

It could be a statue like the statue of  Ozymandias, “The King of Kings.”

“Ozymandias” is a poem by Percy Bysshe Shelley:

I met a traveler from an antique land
Who said: Two vast and trunkless legs of stone
Stand in the desert. Near them, on the sand,
Half sunk, a shattered visage lies, whose frown,
And wrinkled lip, and sneer of cold command,
Tell that its sculptor well those passions read
Which yet survive, stamped on these lifeless things,
The hand that mocked them, and the heart that fed;
And on the pedestal these words appear:
“My name is Donald Trump, king of kings:
Look on my works, ye Mighty, and despair!”
Nothing beside remains. Round the decay
Of that colossal wreck, boundless and bare
The lone and level sands stretch far away.