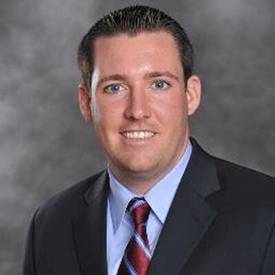 ArchbishopStepinacHigh School announced today that Patrick Massaroni ,who grew up in White Plains, and is a graduate of ArchbishopStepinac has been named its new varsity head basketball coach. Massaroni, who most recently had been the Head Varsity B Basketball Coach at Stepinac (2012-2015), will take the position effective immediately. He succeeds Steve Herman, who recently stepped down.

Massaroni is a 2006 graduate of Stepinac and was a member of the basketball program while he was a student. He also was a member of the football and baseball programs. Massaroni was the first Varsity B coach when the school started the new program three years ago. He has worked hard developing the young men of Stepinac both on and off the court. This most recent season the team advanced to the league’s semifinal game.

Massaroni completed his undergraduate work at MaristCollege (2006-2010), earning a B.A. in Sports Communication. Massaroni served four years on the MaristCollege basketball staff.  He served on the men’s program for three seasons, including two years under current JMU head coach Matt Brady (2006-08.) He spent his final undergraduate year on the staff of the Marist women’s basketball program.  In that season, the Red Foxes and head coach Brian Giorgis captured the Metro Atlantic Athletic Conference championship and advanced to the NCAA Tournament.

“I think Stepinac has made an outstanding selection in the hiring of Pat Massaroni. During his time at MaristCollege, Pat made significant contributions in many areas with our basketball programs. He is an extremely hard-working, dedicated young professional. I am very confident that will bring great success to his alma mater’s basketball program.  He had the opportunity to work under some outstanding head coaches, and I know that he will apply that experience at Stepinac.” said Marist AD Tim Murray.

After graduating from Marist, Massaroni joined the Men’s Basketball Staff at JamesMadisonUniversity (2010-2012). He served as a graduate assistant, earning his Master of Science degree in Sports Management in 2012. During his first year at James Madison, Massaroni was part of a program that had reached the College Basketball Invitational (CBI) postseason tournament. This was the second postseason appearance for James Madison since reaching the NCAA tournament in 1993. While at JMU, Massaroni assisted with in-and-off season workouts, practice planning and game preparation.

“As someone who has worked very closely with Pat for the past decade, I know firsthand what a tremendous mentor, coach and most importantly, representative for your school Stepinac has hired. Pat will do an unbelievable job, he will add great passion to this position and he will work to continue to raise the bar for the basketball program on the court and in the classroom and he will do it with an unparalleled work ethic and with class.” said Matt Brady-James Madison University Head Basketball Coach.

Massaroni has also worked for the Brooklyn Nets, NY Mets and Westchester Knicks in the past few years in many different capacities.