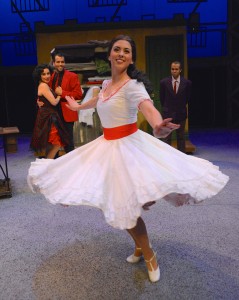 Carly Evans Is Maria in Westchester Brosdway Theatre’s WEST SIDE STORY–as relative now as it was 58 years ago.She sings “I Feel Pretty– the young lady’s feeling that this song immortalized, a Maria for Our Time.

I just met a girl named Maria…and I’m in love. 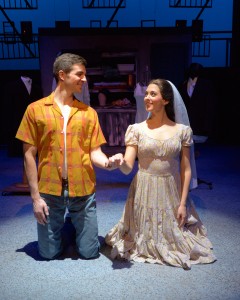 She’s  Carly Evans and she and her “Tony,” of the West Side quintessential street gang “The Jets,”  powerfully belted out  by Zach Trimmer (above) are the couple you-want-to-be if you’re young and in love. All Photos by John Vecchiola, Courtesty, Westchester Broadway Theatre

The fates of Tony and Maria captured and broke the hearts of thousands of performances in 1957 and West Side Story is back at Westchester Broadway Theatre big time.

Carly Evans  and Zach Trimmer are Westchester Broadway Theatre perfect choice to bring back one of the game-changers of Broadway , the iconic West Side Story. Westchester BroadwayTheatre is the curator of great Broadway musicals for generations.  Director/Choreographer Barry McNab has brought WSS back to contemporary relevance nightly for the next three months —it speaks to us as much today as it did in 1957–

Westchester Broadway Theatre opened its revival of the show that changed musicals forever last week and picked this show because it holds up to the sands of time.

The courageous book tackled the theme of prejudice and hate between ethnic groups and examined the destructive contagion of mob behavior through the metaphors of the Latino Street Gang Sharks and the white Jets. When Tony a Jet falls for the Latino Maria, it is a love star-crossed by their ethnic incompatibility.

The teaming of Ms. Evans and Mr. Trimmer is  a thrilling new duo you’ll hear a lot from in the future because they deliver the anxieties and joy of their conflicted relationship in their robust portrayal of  one of Broadway’s most famous couples 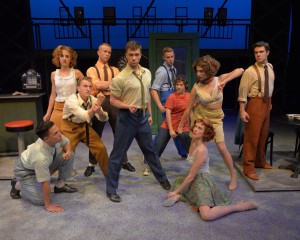 Zach Trimmer as Tony–at the candy store– with Da Jets. “When you a Jet, You a Jet All the Way”

Mr. Trimmer’s take-charge baritone thunders through the house sending chills up your spine as he delivers everything Tony feels  that will the most jaded man will recognize that feeling when a woman just knocks you out on his great solos— the unforgettable, “Maria,” “Something’s Coming.”

Ms. Evans and Mr.Trimmer duet together poignantly on Tonight, Tonight .

Ms. Evans’ delightful “I Feel Pretty” flighty, with dance steps that make her look as if she’s walking on air,  winning you over with the joy of young love. 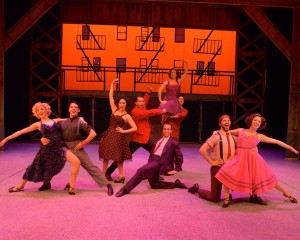 Brandon Contreras as Bernardo, Leader of the Sharks (in the red jacket) at the high school dance,  is protective as Maria’s brother and Sharks’ leader—a Latino “Fonzi. “ His  role is strong and he  articulates concern for Maria, and a  conflicted reluctance to fight in the rumble as circumstances and what is expected of him by the gang lead him to his unexpected accidental death: 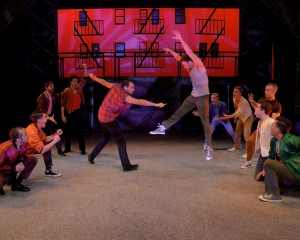 Sharks Xavier Reyes, Michael Graceffa, Alexander Gil Cruz and Emilio Ramos do a joyous “ America” showing off their moves with the Sharks’ girlfriends who bring back teased, high hair to its original art form –“Way to go’s” to Ms Evans, Allison Thomas Lee, Arianna Rosario, Sarah Gawron and Kelsey Orem on this one. Also—a great job on “New Yawk” accents by all.

The Jet Gang opens with “When you’re a Jet, you’re a Jet All the Way” and suddenly that old teen gang feeling is immediately placed…in that once and distant time that seems as fresh as today’s sad headlines.

The  Jet Boys relieve the tension in Act Two when the hunt is on for Tony by The Sharks to avenge Bernardo’s accidential stabbing by Tony who tries to stop the rumble.  The Jets “Officer Krupke” is a slapstick mocking blend of the neighborhood beat officer with pratfalls and hilarious timing.

The use of lighting by the Wizard of Light Andrew Gmoser in a red anger of hate hits the rough, realistic knife fight in the rumble captures the mindless prejudice of the time that is as real a problem today as it was 58 years ago when this show electrified Broadway. 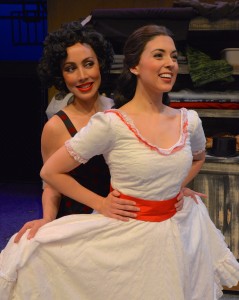 Allison Thomas Lee(left above  as Anita deserves special mention as Bernardo’s girl friend for bringing high believability to the role of Maria’s friend. She solos solidly and winningly in “America”  and recreates the role originally sung by Chita Rivera, and compliments Ms. Evans on the commiserating duets, “A Boy Like That” and “I Have a Love.” above.

The Second Act sorts out the converging discords that hate without reason breeds leaving heartbreak delivered in a way that magically uplifts. 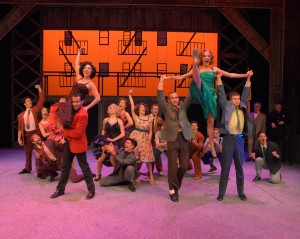 West Side Story recreates the Upper West Side of the 50s…through July 5. Box Office is 914-592-2222, for more go to www.BroadwayTheatre.com