↓
Home Menu ↓
Home→Governor Cuomo: Use 40% of the Renegade Banks’ Settlement Money to Pay for the New Tappan Zee Bridge, Astorino and Day Say 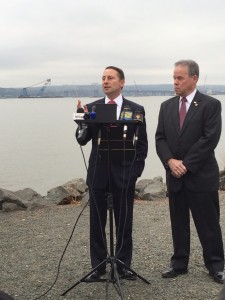 Westchester County Executive Robert P. Astorino and Rockland County Executive Ed Day  called on Governor Andrew Cuomo Monday to use a substantial portion of the approximately $5 billion that the state received in settlements with BNP Paribas SA and Credit Suisse Group AG over economic and tax improprieties to help pay for the new Tappan Zee Bridge which began construction earlier this year.

The two men, who lead the counties where the bridge sits on either side of the Hudson, said that $1.95 billion represented a fair and equitable figure for a bridge that currently has no funding plan in place.

“The bank settlement funds should be spent entirely on state infrastructure projects and not on recurring expenses, and a large portion of those funds should be used to help pay for the new Tappan Zee, a bridge of critical regional and statewide economic importance,” said Astorino.

“In the absence of anything definite from Albany, County Executive Astorino and I worked together to develop a Tappan Zee Bridge funding plan of our own:  a reasonable, workable and smart solution,” said Day. “Our commuters and businesses simply cannot afford the burden of even-higher tolls. Our idea to use a portion of the state’s bank settlement money to fund bridge construction will keep the economic wheels moving in both Rockland and Westchester counties.”

Astorino and Day said they came up with the $1.95 billion figure because it was half the cost of the new $3.9 billion bridge and because it represents about 40 percent of the bank settlement windfall.  They said 40 percent was more than fair considering the bridge’s far-reaching impact and importance as a key bridge between Upstate New York and Westchester, New York City and Long Island.  Nearly 40 percent of southbound crossings of the Tappan Zee end in New York City or Long Island according to the New York State Department of Transportation.

More than 138,000 vehicles cross the Tappan Zee Bridge every day.  That makes it the 3rd most traveled bridge in New York State after the George Washington (276,150) and Verrazano Narrows (182,676) both controlled by the Port Authority.

According to the Construction Industry Council of Westchester, the seven counties that make up the Lower Hudson Valley (Westchester, Rockland, Orange, Putnam, Dutchess, Ulster and Columbia) have been historically shortchanged by the state, receiving 12% of New York State’s transportation funds.  Long Island receives 24% — twice as much.  Yet, Long Island only has about 25% more population than the seven Lower Hudson Valley counties (2.9 million to 2.3 million).

Finally, Astorino and Day said that without using a substantial portion of the bank settlement, motorists on the Thruway – not just on the Tappan Zee Bridge –would face big toll hikes.

“The Tappan Zee Bridge toll hike would be sky high but drivers throughout the state would see big toll hikes as well. This all can be prevented by doing the smart and sensible thing and that’s to make a sizable investment of the bank settlement funds into this project,” said Astorino.  “The money is right there.  We just need the governor to resist the temptation to spread the wealth to special interests and recurring expenses.  With infrastructure investments everyone benefits.”

Astorino and Day have sent their proposal to Governor Cuomo in a formal letter.