↓
Home Menu ↓
Home→Photograph of the Day: MAJOR DEEGAN LANE OPENS AT THE TRIBOROUGH BRIDGE IN THE NICK OF TIME 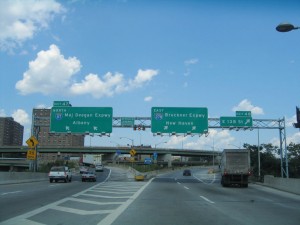 One week ago, the traffic reports on the radio were ignoring the incredible shutdown of one of two northbound entrance lanes at the beginning of the northbound Major Deegan Expressway which starts just after northbound-from-Queens traffic is moving off the Triborough Bridge.

Beginning November 17, Northbound traffic was back up south across the Triborough, down onto the Brooklyn-Queens Expressway creating about 45 minute delays. It made motorists late to work, and there were no Port Authority or NYPD officers supervising the vehicles attempting to merge. Have you ever seen traffic supervision by the NYPD at major construction in New York? I haven’t!

I reported this stealth construction (after sitting in its agonizing delay three straight days), three times to WCBS 880 and only on the third day did it surface on a broadcast report. What’s up with that? Do traffic reporters conceal incredible mismanagement in road construction taking place in rush hour to avoid making the DOT look bad…or whatever.

Unfortunately finishing any road construction in White Plains in a timely manner does not happen. Mamaroneck Avenue in White Plains was supposed to be repaved south of Post Road this summer. It has just started.

Saxon Woods Road was torn up in September as Con Edison takes its time installing gaslines, and a suspension smashing nightmare of temporary plates and fill-ins has made the neighborhood virtually a maze of aggravation. (See below:) 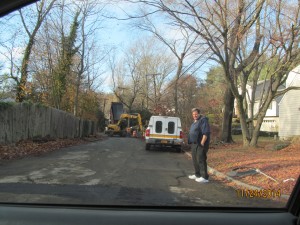 Could the city and Con Ed plan better?

Could Traffic reports be reported in more useful fashion by reporters who know New York traffic like Fearless Fred Feldman used to do when he pioneered helicopter traffic reports?

Here are things every motorist should know–that no traffic report will tell you:

2. The Bruckner Expressway is the best way to get into Manhattan via the Triborough Bridge anytime.

3. The BQE southwestbound into Brooklyn always floods under the underpasses and it has flooded that way since the  1950s. When are they going to fix that?

4. The Saw Mill River Parkway is the best way into Manhattan…do not even think about taking the I-87 Deegan southbound to get to the George Washington Bridge.

5.Leave early. Depart at 5:15 in the morning for a commute into Manhattan.

6. The Whitestone and Throgs Neck Bridges are rarely reported about on the traffic reports — especially on the weekends. My advice is always to take the Whitestone southbound into Long Island…

7. Best way to get down into Jersey if you work on the Jersey side is to take the Lincoln Tunnel and plan to hit it at about 6:15-6:30 A.M. Returning from the Jersey side in the evening is make your way up Weehawken and divert to 9W and take the Tappan Zee Bridge.

8.Best parking in Manhattan for Midtown is in Hell’s Kitchen off 48th Street and 10th access via West Side Highway at 48th Street…and go up 10th Avenue and park at the Skyline Hotel,cheaper and the walk into the theatre district is very pleasant.

9. The best route northbound in morning rush to White Plains is the Bronx River Parkway. Pick it up from the Bruckner Expressway at Exit 52. You can take BRP northbound to Scarsdale and exit at Garth Road, eliminating the one-lane shutdown north of that and follow Garth to the Scarsdale R.R. station, make right and follow eastbound to Route 22… (this avoids the Sprain problem, and the northbound Hutch perpetual problem northbound).