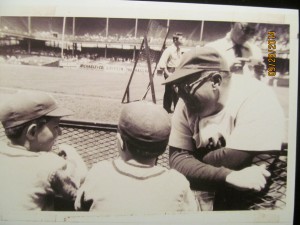 The legendary Happy Felton (right), with Knothole Gang Members, Richard and Barry Zamov in the 1950s. Both grew boys grew to be educators, Richard (below with John Vorperian (left) on the set of BEYOND THE GAME,  teaches Sociology at George Washington University, leading a course on Jackie Robinson’s Legacy, and Barry teaches in Florida. 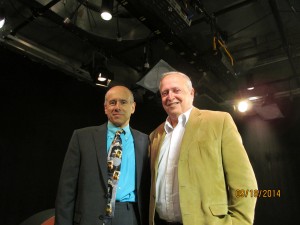 Dr. Zamov and his brother, Barry grew up loving the Brooklyn Dodgers, appearing once on the best pre-game show of all time, Happy Felton’s Knothole Gang, telecast before Dodger home games on the old Channel 9, where they met and shook hands with the great Jackie Robinson.

Dr.Zamov’s meeting with Jackie turned into a major force in his life. He teaches a Sociology Course at GWU: SOC 2151.10 (32224) “Jackie Robinson: Race, Sports & The American Dream.  As chairman of the Jackie Robinson Society, he has introduced Mr. Robinson’s role as an informal civil rights leader to more than 1,200 students attending 14 schools in six states, the District of Columbia and Japan.

Dr. Zamov received a Certificate of Recognition from White Plains Mayor Thomas Roach  at his appearance in The Edge at White Plains Public Library in September, and the Westchester County Board of Legislators declared September 18 “Jackie Robinson, the Man and His Legacy,” Day.

The interview will also be shown at 9 P.M. onFriday