Classes for the new school year began today for Archbishop Stepinac High School’s Freshman Class consisting of 213 students, representing yet another spike in enrollment that the 66-year-old, all boys school has experienced in recent years. 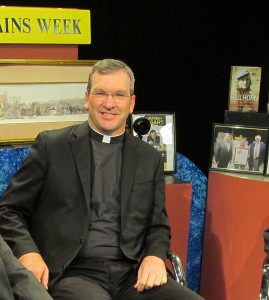 “Equally significant is that over the same five-year period, the percentage of prospective students who indicated that Stepinac was their first choice also jumped sharply,” said Father Thomas Collins, (Pictured above appearing last September on WHITE PLAINS WEEK, the White Plains TV City News Roundup Show) President. He added, “Back then, 139 students put Stepinac first. This year, 242 made Stepinac number one, representing an astonishing 74% gain.”

The impact of soaring enrollment forced Stepinac this summer to create a wait list for the freshman class as well as hire eight new faculty members.

In explaining the striking difference that five years has made at Stepinac, Father Collins pointed out that today’s freshman class will enjoy several advanced educational and extracurricular features and capabilities that were not available to freshmen in 2008-2009.

They include an all digital textbook library, the first of its kind in the nation; a state-of-the-art computer lab and physics lab; a synthetic turf athletic complex as well as significant enhancements to the school’s Major Bowes Theater and notable building façade, parking lot and grounds improvements.

“As these became a reality, we showcased them at our Open Houses. Over time, word-of mouth—combined with our marketing efforts—sparked increased interest among our target audience of middle-school boys and their parents,” Father Collins explained. “Given our school’s tremendous progress and consistent record of shaping future leaders by providing an outstanding academic education grounded on strong Roman Catholic values and traditions, it comes as no surprise why so many more prospective students and their parents are knocking on our doors.”

Geographically, each of the key areas where Stepinac draws enrollment—the Bronx, lower and Central Westchester— have shown increases over the past five years. But, the school has also been steadily attracting students from northern Westchester, a trend which is expected to continue in the years ahead.

The catalyst that sparked Stepinac’s seemingly overnight enrollment success story was the decision that the Archdiocese of New York made five years ago for 10 of its high schools including Stepinac to become independently chartered. In so doing, each school would be responsible for budgeting, fund raising, marketing and other governance functions associated with running a successful educational institution.

As part of its new independent status, Stepinac created a Board of Trustees comprising prominent alumni and other leaders who have been committed to chart the school’s new future. In 2011, it appointed Father Collins, a Stepinac alum (Class of 1979) as its ninth leader. Previously, he served as Stepinac’s Associate Dean of Students.

“The key to Stepinac’s success has been the tremendous generosity and support of our alumni who have made it possible to raise and invest several millions of dollars to help keep our school at the forefront of secondary education in the region,” Father Collins related. “I cannot imagine how this remarkable story can be told without their fierce loyalty and commitment.”

Sometime later this fall, the school’s new video conference center, located adjacent to the library, will open. It will not only enhance Stepinac’s ability to communicate with its core constituents but it will be used by students to interface with their counterparts in foreign countries, a likely outcome from Stepinac’s recent hosting of students from China.  “A new and exciting chapter in education is happening and Stepinac is proud to help lead the way,” Father Collins stated.