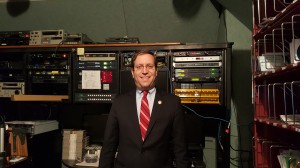 Mr. Buchwald at a recent visit to the White Plains Television Studios.

Buchwald has earned the endorsement of five parties, including the Democratic, Independence, Reform, Women’s Equality and Working Families Parties.

Illustrating the breadth and depth of support Assemblyman Buchwald has received, over 2,500 Democratic signatures were collected by volunteers, more than five times the amount required to make the ballot. An additional 341 signatures on the Independence, Reform, Women’s Equality and Working Families Party petitions were turned into the Board of Elections.

Assemblyman Buchwald said, “I am honored to have such wide support throughout Westchester. In the Assembly, I have worked on behalf of Westchester residents, from fighting to protect our environment, to standing up for women’s rights, to working to reduce our tax burden. I am grateful that I have earned the support of Westchester’s community and political leaders of all stripes.”

Buchwald continued, “And now, more than ever, it is critical to protect our shared values, as they are under assault from Washington. I would consider it a great honor to continue to stand up for my constituents and to represent Westchester in the State Assembly.

First elected to the New York State Assembly in 2012, Assemblyman David Buchwald has dedicated himself to making Westchester a better place to live, work and raise a family.

He is also the author of the groundbreaking constitutional amendment allowing the forfeiture of corrupt public officials’ taxpayer-funded pensions.