↓
Home Menu ↓
Home→TIMOTHY CONNORS BROUGHT BACK FOR ANOTHER 2 MONTHS AS INTERIM SUPERINTENDENT ON A PER DAY BASIS. DR. FRIED CONTINUES TO RECOVER FROM A HEALTH ISSUE. 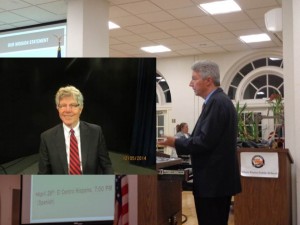 THE WHITE PLAINS BOARD OF EDUCATION HAS EXTENDED THE PER DAY CONTRACT WITH FORMER SUPERINTENDENT OF SCHOOLS, TIMOTHY CONNORS, THROUGH AUGUST TO CONTINUE AS “INTERIM SUPERINTENDENT.”

DR. PAUL FRIED THE SUPERINTENDENT OF SCHOOLS MR. CONNORS IS SUBSTITUTING, AT THIS TIME IS APPARENTLY EXPECTED TO BE UNAVAILABLE AS HE RECOVERS FROM SURGERY, THE NATURE OF WHICH HAS NOT BEEN DISCLOSED.

MICHELE SCHOENFELD, CLERK TO THE BOARD OF EDUCATION TOLD WPCNR THAT MR. CONNORS IS NOT EXPECTED TO WORK 5 DAYS A WEEK, BUT ONLY COME IN AS NEEDED. THE PER DAY RATE WILL BE AVAILABLE AFTER MR. CONNORS SIGNS THE TWO MONTH CONTRACT.

In other Board of Education action…

It approved a new Memorandum of Agreement with the Administrators and Supervisors Association, through the 2018-19 school year, setting salary scales for different positions at an increase of 2%, according to Interim Superintendent Connors. Details of which are not available yet until the agreement is signed by the union.

Fred Seiler, outgoing Assistant Superintendent for Business, told WPCNR that as part of the agreement, administrators at the top of the new salary scale (about one-third of the administrator work force) would receive an additional 3/4% the first year, 1% the second year and 1-1/4% the third year of the contract, while those within the scale “who have not been here as long,” would receive an average of 2%. Seiler said the contract fit within the new budget beginning July 1. Incidentally, tomorrow June 30, is Mr. Seiler’s last day with the district. He is retiring after 10 years.

The Board approved a Memorandum of Agreement with the White Plains Teachers Association settling a series of “grievances” issues. The details are not available to the public until the agreement is signed.

Jessica O’Donovan, Assistant Superintendent for Curriculum and Instruction had her contract extended for another three years, through the 2018-19 school year.