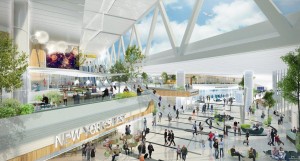 WOW! CUOMO’S LAGUARDIA–TO OPEN BY THE END OF 2021. THE DEAL WAS SIGNED WEDNESDAY.

The announcement marks a major milestone for the renowned project, with construction on the new 35-gate Terminal B expected to begin shortly. New facilities will begin to open to the public in 2018, with all portions of the new Terminal B slated to open by the end of 2021.

A rush transcript of the Governor’s remarks is below:

Hello and good afternoon. I think these gentlemen and the teams that have worked with them deserve a round of applause because this is a really big deal and it is a great job. This is an exciting day and it is a long time coming. It has been a lot of hard work that has gone into getting us to this point but we will actually be starting construction on a new LaGuardia Airport, an entirely new LaGuardia Airport that is long overdue and is essential for New York.

If you look at the airports around the world it is clear that New York has been left behind, that many on the great international airports are better, more sophisticated than New York’s airports. LaGuardia and Kennedy are the front door for New York to the world. LaGuardia especially, Kennedy needs improvement and we are working on that but LaGuardia especially, it has been unacceptable for a very long period of time.

Vice President Biden, God bless him, has a way of speaking frankly and he made that point when he said if you were blindfolded and you landed in LaGuardia airport you would think that you landed in a third world country. Not the most tactful statement but he made the point and he was right and anyone who has been using LaGuardia for the past ten or twenty years knows that it is not what it needs to be and it is certainly not of New York Quality. So the plan was, let’s do it right. Let’s do it from the ground up and let’s build a whole new airport. Not rebuilding what was, we are not repairing what was, this is virtually, blank slate, building new and it is a really overdue but exciting opportunity.

So to Pat Foye the executive director has done a magnificent job shepherding it through, the chairman John Degnan of the Port Authority, LGP Partners, Delta Airlines, Rick Cotton, Dan Tishman and so many people who have worked long and hard to get us here today.

Why hadn’t we done it before? Well it is hard to build an airport, you know? It is expensive and it is complicated and it is technical. This is going to be the first new airport since the Denver airport built twenty years ago. So it is difficult and I think especially in New York, somewhere over the past couple of decades New York lost part of its governmental ambition right?

This is a public sector job, this is a public sector project. We are doing it in partnership so it is a private sector partnership as Pat mentioned the largest in the country but it is complicated and it is tough and we lost our appetite for big and complicated, difficult public works. I have been working very hard to regain that ambition because you need to. You need to continue to build and grow, otherwise other places will pass you by.

Airports, trains and bridges and we are doing it all across the board. LaGuardia airport, we are working now on the redesign of Kennedy airport. We are working on a new Penn station, Penn Farley complex, we are working on adding a third rail track to the Long Island Railroad coming in from Long Island. Eastside access, large scale capital projects to make sure New York stays New York and New York leads the other states and the other countries in making sure we have state of the art facilities.

Again I know how long and hard these gentlemen have worked and now the work really just begins I want you to know, the shovel will literally go into the ground and then we are going to do a ceremonial groundbreaking to celebrate the moment. It is exciting and it is a new day for New York.