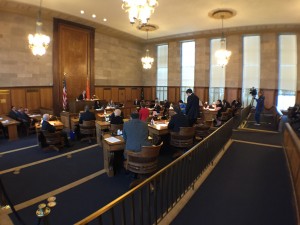 Westchester County Legislature passing 2016 $1.8 Billion budget. It does not increase county property taxes, but does not cut spending either, and restores proposed cuts by County Executive Robert P. Astorino. Photo, Westchester County Board of Legislators

WPCNR COUNTY CLARION-LEDGER. From the Westchester County Board of Legislators. (Edited by WPCNR,edits in italics). December 14, 2015:

On Monday evening, the bipartisan coalition that controls the Westchester County Board of Legislators (BOL) passed a budget for 2016 that does not raise taxes and restores cuts to non-profits, parks and public safety.  This is the sixth consecutive year with no tax increase to the County tax levy.

Your editor notes the new budget anticipates approximately a $25 Million increase in the sales tax revenue in 2016. This is about $22 Million less than the county will make this year $500 million, should it match last year’s Nov-Dec. sales tax revenue figures ($128 million) As of the end of October The New York State Department of Taxation and Finance reports the county has received $371,570,608.  The Budget is only balanced if the sales taxes revenue in 2016 increases 5%

Board of Legislators Chairman Michael Kaplowitz (D) Somers, praised the bipartisan coalition for their hard work and cooperation while offering the warning that the budget offered no margin for error.  “My colleagues and I have worked very hard to produce a sound budget that protects those who rely on county services while delivering no tax increase for the sixth consecutive year.  The budget we passed was a vast improvement over the budget that the County Executive proposed however there are some elements of the budget that will require close supervision throughout the year.

“We saw diminished sales tax revenue this year because of plummeting fuels costs which will leave us short of what we anticipated.  As a result we will likely have to use dollars from our fund balance to make up that shortfall.  I am afraid that we may find ourselves in a similar position next year.”  Kaplowitz added, “A continued draw down of our reserve fund will lead to the loss of Westchester’s AAA bond rating.  My colleagues and I are going to be watching revenues and spending very closely throughout this fiscal year.”

Minority Leader, Legislator John Testa (R) Peekskill, said that a tax increase should be the last option in developing a budget.  “My colleagues and I approached these negotiations with the attitude that collaboration and compromise were needed to make this the best budget possible.  We added back as many of the jobs and service programs that we could but our colleagues in the Democratic Caucus ultimately voted against the budget which restored funding for the social safety net but did not offer any realistic alternatives.” Testa said. “While collaborating on the budget with County Executive Rob Astorino he assured us that he can manage Westchester County on the budget that we passed today and I believe him.  Westchester families can be sure that we remain committed to holding the line on taxes while maintaining the quality of life we all enjoy in Westchester County.”

Legislator Sheila Marcotte (R) Tuckahoe, Eastchester, New Rochelle, is Chair of the BOL’s Budget and Appropriations Committee.  “I’d like to thank the many Commissioners and Department heads throughout Westchester County who participated in the Budget Committee review process.  Between committee meetings and public hearings we spent many hours and days listening to hundreds of people about county operations and the needs of our non-profit partners.  I am happy that to a large extent we were able to restore many programs and positions.  I am most happy that for the sixth straight year, we stood with taxpayers with a no tax increase budget.  An accomplishment that is, frankly, unheard of in these economic times.”