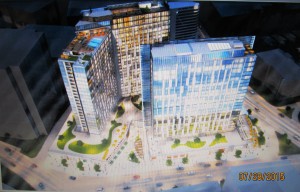 Perkins Eastman rendering of the new apartment and retail complex present by Maple and Broadway LLC, subsidiary of Lunnar Corporation to the Common Council Monday evening.. This aerial view is looking northeastl. Maple Avenue is street on the right. South Broadway is in the foreground.

At the Common Council Special Meeting Monday evening, Maple & Broadway LLC, subsidiary of Lennar Corporation,  the second in the nation builder of family housing communities, unvieled their vision for replacement of the White Plains Pavilion Mall, should they close on the property. 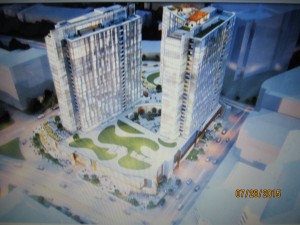 Jim Benerofe of suburbanstreet.com told WPCNR that the giant developer plans a rental housing development consisting of two apartment towers of 24 stories, with a total of 707 rental units, 70 or 10% of them at “affordable housing” rates and the rest (631) at market rates.

Benerofe said price points were not brought up. He said that a principal of the Lennar subsidary at the meeting said there was to be 85,000 square feet of retain and would consist of a majority of new restaurants. There would be separate parking for residents and retail patrons.

A feature Benerofe said included two swimming pools on each top floor of the two buildings.

Benerofe noted the proposal “makes a lot of street sense” compared to the original Urstadt Biddle proposal. Urstadt-Biddle of Stamford sold the property to Lennar this month. Retail will be on the streets of Maple and Broadway with the apartments being on the interior. The previous project had retail on the street, and inside the complex and contailed a hotel and apartments.

The proposal will be presented to the Common Council next Monday, August 3 in a televised meeting. Councilpersons Dennis Krolian and James Kirkpatrick were not present.

In announcing the proposed acquisition in May Urstadt Biddle said in a news release:

” In November 2014, the City of White Plains approved the Company’s request to change the zoning of the property to allow its development as a mixed-use property containing residential apartments above ground level retail and restaurant uses. The contract contains several contingencies that need to be satisfied in order for the transaction to close, and there is the possibility it may not close.”