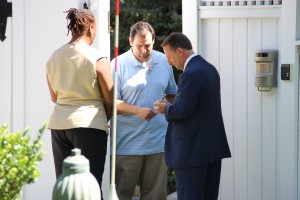 WPCNR HOUSING GO ROUND. From the Westchester Department of Communications. July 26, 2015:

At one point Astorino knocked on Mrs. Clinton’s door to see if she was home.  He gave his phone number to an aide who said Mrs. Clinton would call him back.

Astorino said he wants to ask her whether “she believes the town she lives in is discriminatory, and whether she, as the presumptive Democratic nominee for President, supports the current administration’s radical housing policies.  It would give many of her neighbors in town and throughout the county some comfort to hear her respond ‘no’ and ‘no.’” 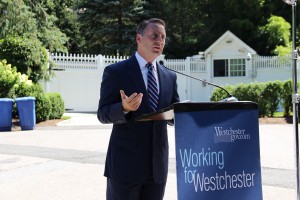 Astorino stood in front of the residence of New Castle’s most famous resident, Hillary Clinton, as he warned that home rule, a power long cherished in New York and which gives localities the ability to pass laws to govern themselves as they see fit, is being threatened by an increasingly abusive and overreaching federal government intent on socially re-engineering America’s suburbs.

“What’s at stake is who controls the future of our towns, villages and cities across the nation – the people who actually live in them, or unelected bureaucrats operating out of cubicles in Washington,” Astorino said.  “What’s new is that, if changes are not made, local control of your neighborhood is on the way out.”

The U.S. Justice Department (DOJ) wants Westchester County held in contempt of court and fined $60,000 a month, stemming from the reclassification of 28 affordable housing units in the Chappaqua Station development. The fine is based on a fee schedule that’s not included in the settlement.

In December, the Department of Justice said that the 28 units should count towards the 2014 benchmark for financing under the 2009 federal housing settlement, which calls for the building of 750 units of affordable housing in 31 mostly white municipalities.

But seven months later, the DOJ filed legal papers saying the court should pay no attention to the letter, the units shouldn’t count and the county should be held in contempt.

“The federal government’s assault on our local communities in Westchester is dumbfounding, shocking, and counterproductive,” said Astorino.

Astorino explained:  “Here’s how it works. HUD decides whether your neighborhood meets the quotas the agency believes represent the proper balance of race, income, education and other demographic features.  If the zip code doesn’t measure up, HUD then prescribes corrective measures, which essentially come down to running roughshod over local zoning so HUD can socially engineer the character of your community to bring it in line with its quotas.”

Long Island Congressman Peter King also criticized HUD’s latest assault on Westchester in a statement:  “When I spoke to Secretary Castro last month, he said that HUD uses ‘mission-driven flexibility to work with communities to meet the goals of programs,’ but there is a clear contradiction between what the Secretary said in his testimony and the actions of HUD’s federal monitor. If the goal is to build affordable housing, then requesting contempt of court orders and seeking penalties is completely counterproductive – the litigation will only slow the process down and make it more difficult in the future for municipalities to provide affordable housing.”