Detective Lieutenant Eric Fischer of  White Plains Police told WPCNR this afternoon that the White Plains investigation into the August 17, 2014 his detectives conducted over three months from August through October, helped result in the indictments of  four persons  alleged to commit that robbery and 14 other individuals  from Detroit that formed an organized group.

The Lieutenant said a  second robbery at the same Tourneau store  in the Westchester committed at gunpoint February 24 of this year is still being worked on by his department and is believed not to be related to the Detroit “organized group (his words)”. Information on that robbery may be phoned in to the police anonymously at 914 422-6223. The suspect’s picture is below: 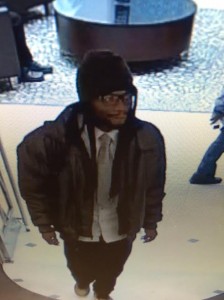 The 18 alleged robbers were indicted by the U.S. Attorney Barbara L. McQuade of the Eastern District of Michigan on charges of conspiracy to interfere with commerce by robbery of stores in Connecticut, Maryland, Michigan, Mississippi, Nebraska, New York, North Carolina.

“It was a great case to be a part of,”  Lieutenant Fischer told WPCNR, “It was extremely gratifying to be able to contribute to this and bring criminals that scared many individuals to justice.”

Four of the 18  were identified by Fischer’s department as having committed the Tourneau robbery at  11:30 A.M., August 18, 2014, at the Tourneau store in The Westchester Mall.  Three men smashed the display cases getting away with thousands of dollars in watches. A security guard scuffled with one robber, smashing the glass door.

Fischer said  DNA blood stains found in an abandoned van found running in the Crowne Plaza lot, used to drive to The Westchester, matched the DNA on a cap left behind by one of the robbers at the Tourneau scene.  Fischer offered that the suspect cut himself on glass on the floor of the store.

Fischer said the DNA in the van and on a dropped cap was linked to a matching DNA sample in a similar  robbery in Maryland. Fischer said other cities and states had similar smash and grab robberies because authorities in those cities contacted him when learning of the robbery in White Plains.  “We contacted (the FBI) and turned over what we had to them in October.” A collaborative effort then began between White Plains and the FBI in Michigan.

The suspect with the DNA match with a Maryland robber, was found by the FBI to be wanted in connection with a Michigan  smash and grab robbery, Daritus Ellis, 30 of Detroit. Others alleged to have participated in the White Plains Tourneau robbery are Elijah McKinney, 24 of Detroit; Kodaryl Cross, 25 of Westland, Michigan, and Latrina Williams, 38 of Detroit.

Fischer commended Detectives Peter Vallely and Jamie Douglass for their “dogged” police work in analyzing videos from city streets, the Crowne Plaza (which showed the perpetrators staying there prior to the robbery),hardware stores and parking garages.

Observation of  videos of city streets, showed a rental car leading the van around town, Fischer told The Journal News,  which lead to Detectives Douglas and Vallely identifying a vehicle rented in the Detroit area, used by robbers to drive to White Plains.

Barbara McQuade, U.S. Attorney in Michigan’s Eastern District said “crews from the metro-Detroit  area planned and executed six robberies. The crews traveled across the country to jewelry stores that sell Rolex watches and other jewelry. Several members of the crew entered the jewelry stores while they were open for business, smashed the Rolex display cases with sledge hammers and fled the store with Rolex watches valued in the thousands of dollars.

These defendents intentionally targeted jewelry stores across the country, exposing the public to danger and attempting to thwart the efforts of law enforcement. Together, law enforcement at every level, through shared intelligence, resources, and evidence, brought their crime spree to a halt.” Ms, McQuadesaid in a statement

The Detroit “organized group,” according to the U.S. Attorney press release executed 40 smash and grab robberies from Nebraska to Mississippi, Michigan to Connecticut in 2014. In Michigan since 2012 they have committed 25 smash-and-grabs.