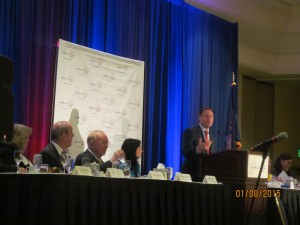 WPCNR COUNTY CLARION-LEDGER. From the Westchester County Department of Communications with on scene reporting by John F. Bailey. January 8, 2015:

In the course of his 25 minute talk, he challenged Governor Andrew Cuomo to get moving on paying for the Tappan Zee Bridge by using the $5.2 Billion Parisbanque settlement windfall to spare tri-state motorists a 40% toll increase, as he did on this week’s appearance on WPCNR’S “PEOPLE TO BE HEARD”.  That program  that may be seen at www.whiteplainsweek.com

Astorino  noted in his speech that the first bridge span would be completed by 2017 and no bus transit upgrade has been designed or routes desgnated or new stationlocations situated across Westchester County.

Astorino  chided the governor for not getting the Mass Transit Task Force moving on making decisions and establishing the Bus Rapid Transit System. Saying as he also did on PEOPLE TO BE HEARD that it had not met in a year.

He used the address to highlight efforts to create Westchester County advantages to attract “millenials” and 25 to 30 years of age to Westchester as well as businesses priced out of New York City. 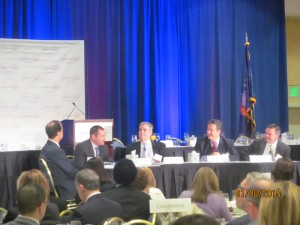 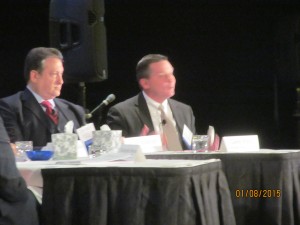 Meyers said residential real estate was experiencing “slow steady growth” at this time, though flat in sales over a year ago. He said average residential  real estate price rose 4% in one year to $635,000 which was 7% more than the average price in 2007 just before the 2008 crash. and that 1,500 multi-family buildings (apartments,rentals and condos) were added or under construction–three quarters rentals in response to the demands of persons moving up from New York City’s higher rents. He emphasized the need for the county to continue to create  afford housing for the middle class which he definedas being 80% of median income.,

Mr. Liebler described the health market as going through an absorption where local hospitals which no longer can be profitable as they would like  as standalone entities are merging with larger hospitals. He said the “ambulatory” care transition was well underway with organizations bringing on private physicians to offer primary care services. He saw medical boutiques combined with multi-uses such as cafes, specialty shops to amuse persons while their loved ones received checkups, examinations and other medical services. WPCNR coins this trend as “the era of the medical mall.”

Class A Office space (top of the line commercial buildings have rebounded to rentals over $30 a square foot and are in demand, according to Glenn Walsh. The reason is the large office palaces have added amenities, stationary and snack shops, and restaurants to create a luxury environment that today’s workforce demands.” A” space is only 10% vacant he said while B Space and C Space   is 20% or more vacant. He said B and C space owners to take advantage of the amenity appeal should consider eliminating some rental and create cafes, workout areas or retail to attract the more quality-of-life oriented younger worker.   He pointed out how  360 Hamilton, 800 and 1133 Westchester Avenue as examples of major complexes that have invested in their interior redesign and repurposing and are now thriving with lessors.

Walsh, by the way, pleaded strongly that Westchester County, the City of White Plains and the MTA should make redevelopment of the White Plains Metro North Station its chief priority, creating residential and office space around the station, suggesting a “new Grand Central Terminal” for the area (for rail and bus).

On the industrial market,  Mr.Schanzersaid industrial space had  to focus on downsizing its space to attract small hi-tech and digital companies being squeezed out of New York City by the high cost of facilities there. This would presumably mean rewiring, resizing the interior for internet, app and digital production companies, for instance.

“Westchester is open for business,” said Astorino. “I am committed to marshalling all of the resources of our county government toward promoting economic growth and prosperity in Westchester.”

As part of his presentation, Astorino released a new report entitled, Westchester Smart: Ideas and initiatives for a stronger economy. The report grew out of candid roundtable discussions held between February and August of 2014 with 50 community leaders representing key demographic and business sectors. The 32-page report identifies the county’s strengths and challenges.

The top three strengths were recognized as the following:

The top three challenges were:

As part of the report, Astorino announced what he called five new “smart” initiatives for 2015 and beyond. Initiatives to be rolled out in 2015 include:

Additionally, Astorino announced the county’s renewed commitment to ongoing efforts and partnerships that support small businesses and minority-and-women-owned businesses, citing small businesses as “the backbone – present and future – of Westchester’s economy.” Astorino thanked the roundtable participants for their time and contributions. The complete report may be viewed online at westchestersmart.com

“The county executive’s initiatives are right on target with the trends we’re seeing in the business community,” said Marissa Brett, president of the Westchester County Association. “We look forward to partnering with county government and Rob Astorino on these initiatives to accelerate our economic growth.”

“Businesses in Westchester or thinking of coming to Westchester have a variety of resources available to them,” said William M. Mooney III, director of Westchester County’s Office of Economic Development. “We’re here to help.”

Financial incentives, as well as advisory capabilities, are provided through the IDA, which assists private sector projects, and the LDC, which assists not-for-profit projects.  In 2014, the county’s IDA and LDC provided low-cost tax exempt financing and other incentives for 20 projects, whose private investment totaled more than $560 million and created or retained more than 4,600 permanent construction jobs. To contact the Office of Economic Development, call William Mooney at (914) 995-2943 or email billmooney@westchestergov.com. 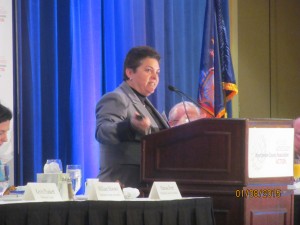 The elite of Westchester business also got a pep talk on the economy from Lisa Shalett, (above) of Morgan Stanley Wealth Management.  She is also a commentator for Fox News.

She said the job figures are very good and that the lowering of gasoline prices is expected to fuel a surge in consumer spending. She noted the pace of the present recovery is not on the pace of most recoveries and blames consumer depression, fear and disbelief of the figures. She drew glowing comparisons with eras of the past such as the 1950s where pent-up demand created the longest sustained economic growth in history, but did not mention that this was fueled by the massive return of America’s fighting men to the workforce and changeover from a war economy to a consumer economy.

Shalett noted also that the children of the baby boomer generation born in the 1970s were now at prime age (35) where they are buying houses, procreating and the first of this group were poised to lead the recovery with their spending. She neglected to even mention the college loans many of these baby boomer children owe that is a major impediment to mortgages.

She characterized  the job figures are strong, “Job Openings are at a 14 year high, but the skills match is not there.”

She reported that corporate earnings are way up and that the stock market should comtinue to soar. Hers was a very optimistic view.