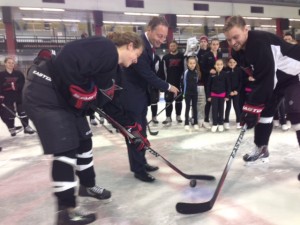 Surrounded by skaters and hockey players, Westchester County Executive Robert P. Astorino threw down a ceremonial puck on center ice Thursday to mark the reopening of the famed Ice Casino at Playland, which had to be closed after suffering severe damage from Superstorm Sandy two years ago to the day.

Other announcements about the further re-invention of Playland included the information that  a review of current park operations and future opportunities will be completed by Dan Biederman, “later this fall.”

Mr. Biederman, is an internationally recognized leader in urban and public space management, whose accomplishments include the restoration of Bryant Park in New York City.  (Editor’s note: Mr. Biederman is also the former principal advisor to Sustainable Playland, the organization previously the Astorino choice to develop Playland which opted to withdraw their application to run the amusement park. )

County Legislator Kay Parker of Rye said the repairs took too long and should be speeded up: “Two years after damage incurred from Superstorm Sandy, the entire north boardwalk is still closed to the public and fenced off because it is still in a state of destruction, which is unacceptable,” said Parker. “The Administration has tried to characterize the necessary repair work at Playland as being ‘ahead of schedule,’ but other municipalities, including New York City, have fixed and renovated their storm-ruined structures long ago.”

Parker visited Playland earlier this week, and the wrecked remnants of the boardwalk are clearly visible, she said, with much of the torn apart planking yet to be removed. Contracts to make the repairs have not even been put out to bid.

“The Administration has simply put a fence around the damaged boardwalk,” Parker said, adding that county residents wanting to visit Playland and stroll along the boardwalk up to the Edith G. Read Wildlife Sanctuary have to detour through the parking lot.

A good deal of regular maintenance of Playland, like painting and paving work, is not being completed on an annual basis either, Parker also noted, giving the park a sense of general deterioration.

“I think it’s shameful that County Executive Astorino would talk about preserving Playland and modernizing its facilities on one side of the park while clearly neglecting the park as a whole,” Parker said. “A short walk from his photo-op today the boardwalk is still in shambles. While I’m pleased that residents will finally able to skate once again at the Ice Casino, the reality here is that this project is 365 days late and nearly two million dollars of anticipated revenue short.”

The Ice Casino is now being operated as Playland Ice under an agreement with American Skating, the largest independent owner/operator of ice rinks in the United States. The 10-year agreement with American Skating, which includes an option to renew for an additional 10 years, included an upfront payment of $300,000 this year; a base payment  of $250,000 commencing in 2015, which will increase by 2% each year thereafter; utilities and maintenance payments of $425,000 annually; and 25 percent of the gross revenue above $1.6 million annually. 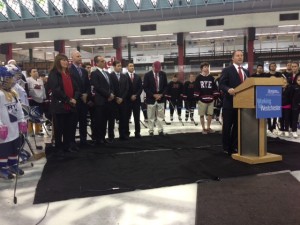 “Our Ice Casino at Playland is like a great athlete,” Astorino said. “When it gets knocked down, it gets up and comes back stronger than ever. Now with our new partner, American Skating Entertainment Centers, joining us, slap shots, double axles, triple toeloops, thrills, spills and lots of family fun will be here at the Ice Casino for many years to come.”

On the evening of October 29 and into the morning of October 30, 2012, Superstorm Sandy tore up the East Coast leaving billions of dollars of damage in its wake. Playland Park and the Ice Casino, which sit right on the Long Island Sound in Rye, were hit hard. Now with a $4.9 million renovation project complete, the 85-year old Ice Casino is once again open to the public and its renowned Art Deco architecture, distinguished by a high-vaulted roof with crisscrossing wooden beams, has been fully preserved.

“Our vision for the Ice Casino is the same as our vision for Playland,” Astorino said. “Preserve the best traditions and modernize the facilities and attractions so the park can have a strong future both in terms of fun and finances. Teaming up with American Skating – a great Westchester company and one of the leading ice rink operators in the United States – helps us do just that.”

As the new operator, American Skating will invest $640,000 of its money into the building over the next 18 months for capital improvements. This money will go largely toward refurbishing and modernizing the interior with upgraded floors, lighting, electronics, bathrooms, locker rooms and guest services areas.

“We are honored to play a role in the vision to re-invent Playland,” said Shane Coppola, chairman and CEO of American Skating Entertainment Centers. “American Skating is committed to making Playland a world-class destination for figure skating and hockey programs by providing outstanding customer service, improving operating efficiencies, and making significant investments to upgrade our iconic facility.  We are excited to be working with some of the most successful hockey and skating programs in New York.”

One of those programs is the men’s and women’s hockey teams from Manhattanville College, whose players were on hand for the reopening of the rink and arena.