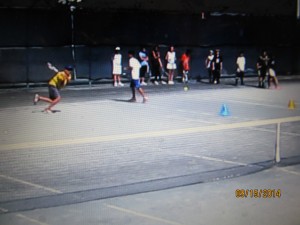 Action in the Afternoon: A youngster slams a volley across the net at Gille Courts at  theTennis Innovators Academy held Sunday to introduce the Academy staff and teaching style. The clinic attended by 35 youngsters and adults  served to introduce the new facility being constructed adjacent Ebersole Rink in Delfino Park. (See photo below) 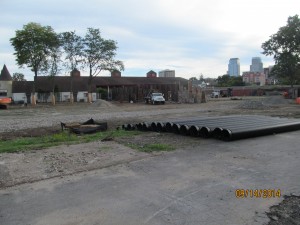 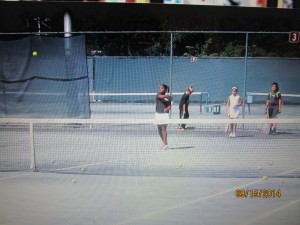 Sixteen youngsters of all ages participated in the first clinic, having a bunch of fun and experiencing the easy-going, active workout worked around humorous, easy-to-understand tips and tweaks on technique. An innovative round-robin game had all particpants involved in a fast-moving game at the end of each session. 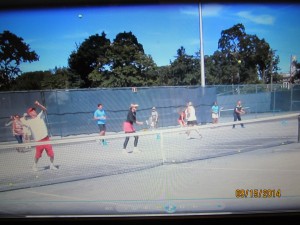 In the adult session that began at 1:15 P.M. featured a formidable gathering of serious older players were involved in a fast-paced session testing their repertoire of tennis shot-making, wrapping up with an exciting competitive round-robin.
An exhibition followed matching Cesar Andrade, Director of Operations for Tennis Innovators Academy, White Plains with three of his instructors in a tense doubles match. 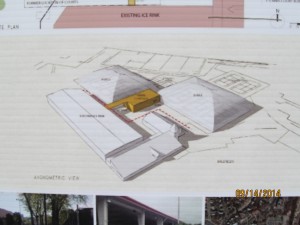 Construction of the new courts is well under way, and Tennis Innovators Academy is paying the $1.1 Million in construction costs.  At this time it is expected to open in January alongside Ebersole Rink. The rendering above and below shows the six bubbled courts, clubhouse and location of the outdoor courts.
Surfaces will be the most advanced surface in the county, according to Cesar Andrade, Director of Operations at the Academy. “The surface is the Har-Tru surface Hydro court system – The court irrigates itself automatically when in need of water, the court(s) are  always in top shape! “ 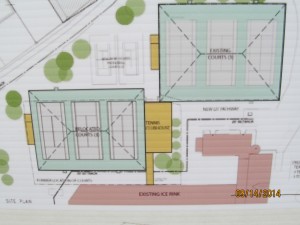 This new facility will bring year-round tennis to both adults and junior tennis enthusiasts. Mr. Andrade, in an interview said the Academy will have bilingual instructors and is dedicated to involving more of the county Latino community in tennis. He plans to bring after school tennis to youth organizations in White Plains as well as the schools
He said White Plains residents with a City of White Plains Recreation and Parks Card will play free on his  courts during the summer season and enjoy 15% discounts on lessons, court times and equipment.
He touted  the new surface his courts will provide that descibed as state of the art. He feels the absence of a membership fee, and the 8 AM to 11 P.M. hours of the club offer an attractive, flexible and superior tennis atmosphere compared to private clubs and health clubs in the area, no matter what a player’s objective will be. He  has done price point surveys of the competition in the area for the tennis dollars, and feels his prices are competitive on convenience, facilities, and tennis atmosphere.
Originally from Ecuador, he moved to this country where he was raised in Queens, graduating Francis Lewis High School in Fresh Meadowns.  He learned tennis through  the Mayor David Dinkens-instituted after school tennis program. He wants to bring that same experience to Westchester and White Plains. He has worked for Sportime and with Tennis Innovators Academy for 12 years.
The Tennis Innovators Academy runs facilities successfully in New Rochelle (the New Rochelle Racquet Club), John Jay Tennis Court, Chinatown Y, Kips Bay Tennis Court, Westend Church, Montclair School, Hunter College Sportsplex and the River School.
For information and questions about the coming White Plains facility and how you can use it, you may send e-mail to info@tennisinnovators.com or go to their website, www.tennisinnovators.com.
They expect to open our courts at Ebersole Rink January 2015.. 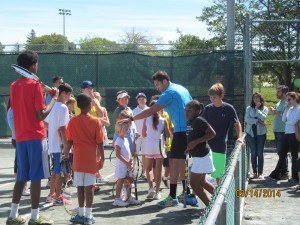 Cesar Andrade congratulating the competitors in the Junior Clinic Sunday. 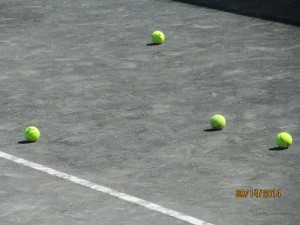