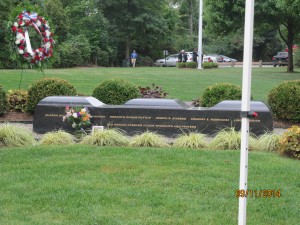 The ceremony observing the September 11, 2001 attack on the World Trade Center, part of a two-site attack by terrorists taking over three commerical airliners was solemnly remembered and the six residents of White Plains honored and memorialized yesterday at 8 A.M. 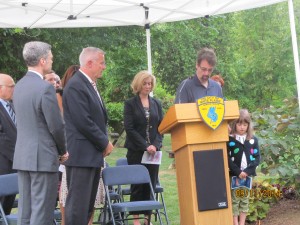 Richard Hoffman, the brother-in-law of Joseph Riverso, one of the six White Plains citizens lost on that day,  read a poem One  that observed  the horror that unfolded that day 13 years ago that every American, no matter who they were, what color their skin was, what religion they followed became “One Family. One Faith” for each other. He is seen here with Marisa Hoffman, niece of Joseph Riverso

The verse evoked exactly how every person living here across the nation felt.  As Mayor Tom Roach noted in his remarks, “we all wanted to help.”

Counilmembers laid a wreath on the marble memorial, after Mayor Roach read the names of the White Plains six.

The Mayor thanked all for coming and quiet conversations followed.

And all dispersed, going our separate ways.

.(You can see and hear Officer Altamuro concluding the remembrance singing God Bless America on White Plains Week, this evening at 7:30 P.M. on Channels 45 FIOS countywide and Cablevision Channel 76 in White Plains, or on the internet at www.whiteplainsweek.com)