After being informed of the French American School of New York Plans by Ann Bobroff-Hajal , of White Plains, the Army Corps of Engineers has requested details of the FASNY site, showing branches of the Mamaroneck River that lay underground in manmade underground conduits of the river branches.

A  letter from Stephan Ryba, Chief Eastern Section, the Army Corps of Engineers, obtained by Freedom of Information Act request sent by Ms. Bobroff-Hajal,  sent to FASNY July  31, (5 weeks ago), confirms this.  Mr. Ryba directed FASNY in the letter as follows:

“It has come to the attention of this office (Corps of Engineers) that the French American School of New York (FASNY) has proposed work activities which may occur in, and involve discharge of fill material to waters of the United States on your property located at 400 Ridgeway in the City of White Plains, County of Westchester, New York.

Until a jurisdictional determination is prepared for the site and approved by the Corps of Engineers, we cannot determine the extent of proposed work in Corps juristion.

Therefore, the Corps recommends FASNY now submit to this office a request for a Corps jurisdictional determination for the entire site to clarify the extent of wetlands and Waters of the United States on the property.”

After receiving this letter The French American School of New York started to submit and continues to submit materials requested by the Army Corps of Engineers delineating site maps and natural streams and features of their proposed new campus construction site.

Here is a copy of this letter: 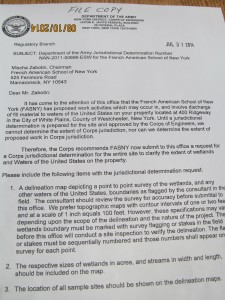 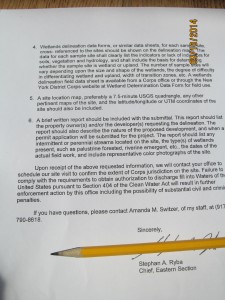 The Corps of Engineers learned of the proposed construction on the former Ridgeway Construction site from White Plains resident Ann Bobroff-Hajal,  one of whom spoke at the still open Special Permit and Site Plan Hearing  continuing this evening at 6:30 P.M. at White Plains High School in the auditorium. The purpose is to hear some 30 speakers who were still left to speak late Monday evening when the hearing was suspended until this evening.

After requesting a  ruling on whether or not the Army Corps of Engineers had jurisdiction on their property twice in June, 2011, the French American School of New York did not submit the scope of their proposed construction as it became available for three years to the Corps, and had not as of the date of July31. They have been very cooperative after receiving the Ryba letter.

It is unclear at this time, if the Army Corps of Engineers ever followed up, or routinely follows up on the development of such requests  after receiving the initial requests from AKRF, the FASNY environmental consultants in June, 2011.  The Army Corps could have asked if they intended construction on the site and what kind. A call has been placed to the Army Corps of Engineers to ascertain whether follow-up is routine in all requests for jurisdiction determination.

A call to the Mayor’s Office has been placed by WPCNR asking if FASNY informed the city of the receipt of the Ryba letter and the pending Army Corps of Engineers review of jurisdiction (and possible plan approval needed).  The Mayor’s Office has not returned the WPCNR call yesterday asking why city hired consultants and planners did not advise FASNY they should provide detailed information on their plans to the Army Corps of Engineers, since the preliminary plan has undergoing review the last three and a half years.

The Ryba letter after a laundry list of what FASNY has to submit, and has not submitted previously, says the Corps will be in touch for an on-site inspection of the premises:

“Upon receipt of the above requested information, we will contact your office to schedule our site visit to confirm the extent of Corps jurisdiction on the site. Failure to comply with the requirements to obtain authorization to discharge fill into Waters of the United States pursuant to Section 404 of the Clean Water Act will result in further enforcement action by this office including the possibility of substantial civil and criminal penalties.”

Ms.Bobroff-Hajal commented to WPCNR that the pond now existing on the golf course, previously thought to be man-made is actually the head waters of the middle branch of the Mamaroneck Riverand feeds an underground pipe with its outflow. She also observed that the new  entrance road at North Street  is planned to be directly over the wetlands that form the Mamaroneck River middle branch.  She commented that when the golf course was made and the pond created using the Mamaroneck River waters, this would have not been allowed under today’s environmental regulations.