A black civil rights organization, The New Rochelle Lincoln Zuber Riders for Justice, based in New Rochelle,  paid for an advertisement to run in the Journal News  only the paper did not run it, yet.

According to a  press release from the Riders organization, announcing a news conference Saturday afternoon to publicize the rejection, the paper declined to run the advertisement.  And the paper has not indicated why they refused it according to the Riders.  Here is the ad copy that as of this writing, has not be accepted for publication by the newspaper. 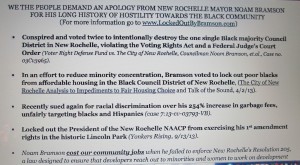 The Riders organization  issued this news release acusing the newspaper of declining to run the ad:

New Rochelle Lincoln Zuber Riders for Justice, a local New Rochelle organization made up of several prominent African-American leaders, will hold a press conference Saturday at 1:00 p.m. in New Rochelle to demand the Journal News run a print advertisement accepted and paid for earlier this week, scheduled to run today (Saturday) but spiked last night by Gannett corporate.

It was only after the paper was put to bed last night that New Rochelle Lincoln ZuberRiders for Justice was notified that the newspaper wanted two words changed in the advertisement. After further discussion, a Journal News advertising executive admitted that even if the words were changed Gannett corporate had directed the Journal News not to run the ad. No explanation for corporate’s decision was provided.

“As long as I have been reading newspapers, I have never heard of a newspaper refusing to run an ad like this.” said McLean, Spokesman for the Zuber Riders. “This is the kind of underhanded tactics we have seen for years from Bramson and his allies.”

The Zuber Riders print ad banned by the Journal News lists the ways Noam Bramson has locked Blacks out of contracts, out of jobs, out of elected representation, even Lincoln Park, the site of one of the most important Civil Rights cases in U.S. history.

McLean said many in the New Rochelle black community have long felt bitterness and distrust for Mayor Bramson but said what galvanized the group to speak out was when the President of the NAACP, New Rochelle Chapter, was thrown out of historic Lincoln Park on September 5th.

“When they threw Ron out of Lincoln Park, that was the straw that broke the camel’s back,” said McLean. “We knew we couldn’t remain silent anymore. People need to know what we know about Noam Bramson’s attitude towards Blacks.”

“For too long the Black community in New Rochelle has been taken for granted, violated and silenced,” said McLean. “We will not stand for it anymore. We deserve better!”

New Rochelle Lincoln Zuber Riders for Justice will hold a press conference in Lincoln Park, across from 95 Lincoln Avenue in New Rochelle, NY on Saturday afternoon, September 21, 2013 at 1:00 p.m.

The Zuber Riders is inviting all those who believe in Free Speech and Civil Rights to be on hand as the media covers this important press conference to expose yet another example of Noam Bramson’s attempts to suppress Black voices in New Rochelle and highlight the facts contained in the ad that the Journal News refused to run.

New Rochelle Lincoln Zuber Riders for Justice is an organization of committed community leaders who are dedicated to honoring the memory of Paul Zuber and ensuring that all Westchester County residents are aware that the struggle for Civil Rights in New Rochelle are always persistent and never forgotten. Paul Zuber was an attorney for the Lincoln school children in New Rochelle. Mr. Zuber successfully fought for integration of New Rochelle’s school district.

The Noam Bramson campaign issued a newsletter by e-mail crying foul, calling out the advertisement for its racist accusations,  to wit:

Rob Astorino has hit a new low. His campaign just issued one of the most despicable, racially-divisive attacks ever made in Westchester, accusing Noam directly of discrimination and bigotry.
I want you to read their attacks, so you can see for yourself how outrageous they are: this press release sets the stage, and this website puffs up the charges. It’s really dirty stuff.
African-American leaders throughout the county have joined together to denounce this attack, issuing the following challenge to Astorino:

We already knew Rob Astorino was running a negative campaign of false attacks on Noam’s record, but this garbage just takes my breath away.