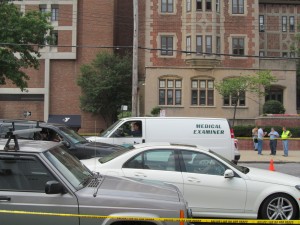 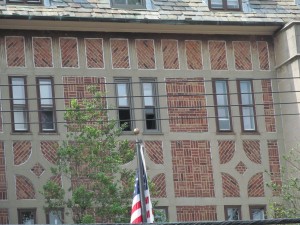 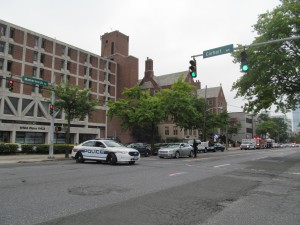 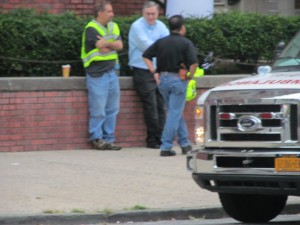 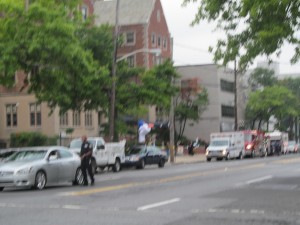 A fire “of suspicious origin” broke out at the YMCA on Mamaroneck Avenue early Saturday morning has been determined by White Plains Police to be the result of a murder suicide involving  a resident who stabbed  the night front desk guard to death, then went to his room on the third floor and set himself on fire. How the suspect set himself on fire has not been explained, though media have reported the method was “incendiary devices.”

Police are expected to turn over the building to the YMCA Sunday afternoon. A spokesperson for the Y in an e-mail, said the Y is expected to reopen September 3, but had not been able to analyze the damage yet (see statement later in this report.)

The YMCA has issued a statement (SEE BELOW) on the incident and will update status of the Y reopening on their Facebook Page at https://www.facebook.com/WhitePlainsYMCA

The self-immolation by the suspected resident started the  blaze that resulted in an explosion that observers said blew out an interior wall of the resident’s room. Some 60 persons fled the building at approximately 4 in the morning. Six firefighters were injured and treated at White Plains Medical Center and released.

Comissioner of Public Safety David Chong announced to media that Micharel Solomon, 68 of Elmsford was stabbed to death by the as yet, unidentified resident of the YMCA, who has not yet been conclusively identified. Dental records are being used for positive identification. Solomon had been a longtime, well-liked employee at the YMCA.

Chong said the as-yet-unidentified resident whom two residents identified to WPCNR as a man named Eddie, was found dead in his fire-damaged room after setting himself on fire.

A spokesperson for the Y contacted WPCNR this morning and gave this statement by e-mail on when the Y will resume operations:

Hi John, initial thoughts are potentially by Tuesday morning, but we won’t know for sure until we can examine the extent of damage to the facility when the police turn over the building to us this afternoon.   A mass email blast will go out to members informing you, and I’ve been updating our Facebook Page which will announce it as soon as I know.

Late Saturday, a Red Cross spokesperson said they expected to house at least 20 persons in some way.

At a news conference Saturday, Commissioner of Public Safety David Chong said names of the deceased would be released by the department via press release. No more details on the cause of the fire and what caused the deaths of the two and the sequence of events that started the fire on the third floor (characterized as an explosion according to a second resident interviewed by WPCNR), were provided at the news conference.

Commissioner Chong was reported by News 12  AS OF 4 P.M., as saying one body was found behind the reception desk on the first floor, and the other body was found in one of the burned rooms,

This is consistent with what a resident of the Y interviewed by WPCNR earlier this morning, who said the incident began around 4 A.M. Saturday morning. The resident told me that another resident of the Y entered the building shot the clerk at the front desk in the reception area of the Y, then the shooter went up to his room and “blew himself up.”

The resident told WPCNR, “I heard a loud bang, smelled smoke then heard the alarms, and got out.”

Asked by WPCNR if they had seen the front desk clerk deceased behind the reception desk, the resident said they had not, but they were concentrating on leaving the building because of the fire. (The resident assumed Solomon was shot.)

The fire occurred in the older part of the YMCA, third floor.

A police and fire crime scene investigation unfolded all day Saturday, with City Corporation Counsel John Callahan and Commissioner of Public Safety David Chong on the scene. Mayor Thomas Roach was not on the scene the times WPCNR was covering, though the Mayor made an appearance late in the afternoon on television. Former Mayor Joseph Delfino was at the scene early around 9 A.M. checking to see if firefighters were ok, he said.

Commissioner Chong confirmed to WPCNR Saturday morning that the Department of Public Safety responded at 4 A.M. to an alarm at the YMCA. The fire involved 2 rooms on the third floor. He said two people are dead, but could not release their names at this time pending notification of  kin, and he could not say the cause of death at that time. He did not say Saturday morning one of the dead was the clerk at the front desk. “It is a fire of suspicious origin investigation at this time.”

Saturday morning, Chong told WPCNR the fire was contained within 20 to 30 minutes  and six firefighters were treated, but not injured seriously. The investigation was continuing he said.

Approximately 60 residents of the YMCA were on the sidewalk across Mamaroneck Avenue from the Y, They were evacuated. At this time the Y is closed. The resident WPCNR spoke to said they had no idea when they were going to be allowed to go back into the building.

As of noon, a Red Cross spokesperson told WPCNR she expected about 20 persons would have to be housed elsewhere. That was her expectation at the time

At mid-morning Saturday, Deputy Chief Anne FitzSimmons was telling persons evacuated to give the American Red Cross, which was on the scene, requests for medicine, and the Red Cross would inform the police, who would go into the building and retrieve the medications for those requesting them.

Carolyn Sherwin of the American Red Cross said St. Matthews Church had opened their  community room to give a temporary place for the evacuated residents. Sherwin told WPCNR they were in “a holding pattern”  as of 9:30 A.M. “We’re working closely with the WPPD. This is an all-hands-on-deck situation.”

She said health specialists, psychiatric and crisis team counselors were on the scene and food was being provided.

Further details as they are made available.

The YMCA has issued this statement Sunday morning on the crime:

At the White Plains YMCA, the safety and well-being of our members, residents and staff is a top priority. We are shocked and deeply saddened by what took place at our residence yesterday morning. Our thoughts and prayers are with the family and friends of these two men. We are grateful that our other residents were evacuated safely and that no one else associated with the YMCA was injured.
We are fully supporting the investigations being conducted by the White Plains police and fire departments. We will work closely with them to determine when our residents can return to the residence and members to the facility. Questions about the investigations should be directed to representatives of the police and fire departments.
The YMCA is working to gather facts about this situation. We will be unable to comment further until we know more. We wish to express our sincerest gratitude to the White Plains Fire Department and White Plains Police Department, both of which responded quickly and expertly.
We will post an update regarding the status of when members can return to the facility and we will be re-opening as soon as possible.