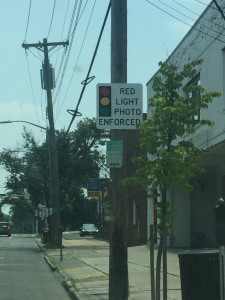 The city announced that since its beginning of active enforcement of Red Light Camera intersections in the city at six locations in the downtown, the city has sent out 7,068 violations to motorists since going “red light real” September 1, in an announcement by city officials put out to the media today.

Of those 7,068 violations, half have paid the $50 fine, according to the city. Accidents over the August, September and October period have been reduced from 30 last year during the same period in 2017 to 23 this year.  If violators do not pay the violation in 42 days, they are charged an additional $25 added to the $50 original fine.

The totals, the city announced that in September there were 2,600 violations sent out in September; 3,969 in October and 499 through November 7.

WPCNR estimates that at at the average of 2,600 violations a month this city would total 52,550 violations for the year, that if all were paid the Red Light Camera “handle” would result in $2,627,500 in revenues.

The Common Council agreed to install red light cameras at a Special Meeting on January 29 of this year.

It agreed to engage American Traffic Solutions to install up to 12 red light cameras, (6 were installed to start as it turned out) at the cost of $18,530 a month per each of the 6 cameras ($111,100 a Month Total resulting in a 12-month annual cost of $1,333,000). (American Traffic Systems has since changed its name to Verra Mobility after a merger).

When WPCNR calculated the cost per month, we committed a mathematical error which reader Cliff Blau informed us of. The real cost is $111,100 a month. (Six times $18,530). Thank you, Mr. Blau.

The result is that in the first three months of live monitoring even with paying for the cameras in August with no charge for violations, the city is about breaking even if we project the last 3 weeks of November.

The city has rented two months of cameras with live ticketing, and even with the grace month of August (when no violations were sent out) the city will have spent about $444,720 through November on the program, and collected revenues of $428,450 for a loss of about $16,279. As we pointed out earlier the original agreement of January 29 is the city keeps all ticket revenue.

Granted persons may learn to figure out how to avoid tickets and time the yellows and reds with more skill to avoid tickets, reducing violations, however the city appears to have a very positive revenue stream with the high traffic December period looming to fill the city with shoppers with automobiles.

With heavier traffic, perhaps more violations will have the program turn a profit the last 3 weeks of December and the holiday shopping season of December.

The revenues based on an average 2,600 violations per month would be $1,560.000 plus late fees, so if violations continue averaging 2,600 violations a month, the city makes a $226,800 profit on the program, if not more, should timing changes of the yellows or new revenue-producing rules are introduced, not that that is anticipated.