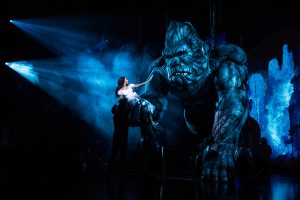 The Best Actor you will see on the great White Way is pecky,  way big, muscles to die for.

He will take you to places you’ll never be again.

His eyes–  dreamy with sensitivity,  ablaze with power.

He holds you in the palm of his huge hand.

His roar makes you shiver.

His moan will makes your heart beat fast.

A smile to die for.

No human actor matches him in swagger, swag, and swashbuckle.

Kong gives the best performance by an actor in a leading role on Broadway—holding the audience spellbound – and yes, reaching  heart,  mind, soul, psyche, fear with a face that ignites.

And he is a handsome big lug.

The King Kong musical  mounted appropriately  at the old Broadway Theater  with its art deco marquee,  palatial lobby, three massive chandeliers above the stage — a 1924 house whose stage has been graced Milton Berle, Alfred Drake, Jose Ferrer, Eartha Kitt, Vivien Leigh, Zero Mostel and Mae West, and Barbra is shaken by the giant of them all—King Kong.

The leading ape, with spot-on  silverback gorilla confidence, captures wild majesty, looms over audience, appears as tall as the proscenium itself. He is the biggest thing ever to hit Broadway.

He is a 9th wonder of the world (animatronics created by Global Creatures)  and brought to vivid, gorillalistic life by a team of his handlers and electronic wizards—you will not believe he is not real.

You will think he is though.

If you see one musical on Broadway, this is the one, because you will never forget the King.

He’s a cocktail party must. He will mingle.

This  show of shows thrusts the  1933 movie classic into 21st Century theater!

The plot is  telescoped. From thudding footsteps as you await the adventure to chilling “lurking roars” while you are waiting for the curtain to rise, and the occasional ‘THUMP!” of something very big that jolts you as you wait.

Then the deeply mysterious  ominous Prologue  curtain goes up on old New York and the leading lady to be, Christiani Pitts (star of A Bronx Tale) stalks into 1931 NYC stunningly conjured by receding skyline in the hustling depression-beset desperate crowds of the streets.

Pitts plays the legendary Ann Darrow, the original scream queen. She is  the ingénue from the country arriving trying to make it on Broadway. Moving animated real scenery of old New York in  sepia takes you back in time, suspends your belief and sets a new standard in tech design mastery: seamless  moving scenary by Peter Englund.

Ms. Pitts and an  acrobatic dance company sing Dance My Way to the Light  She proclaims her quest for stardom in Queen of New York.  She  fails a series of auditions and ends up starving in a diner where (chance encounter!) she is spotted by  promoter Carl Denham, played by fast-talking, sharp-dressing, big promising Eric William Morris  a producer with a plan:  find a mysterious legend on a remote island, and he needs a leading lady.  He gives her a chance, talks her into it and hustles her off to a tramp steamer, the S.S. Wanderer.

The stage is seamlessly changed into the deck of a tramp freighter moving downriver into the Atlantic with waves in front of the bow,  Brooklyn Bridge on the left, then waves on the ocean into fog. This is the most realistic portrayal of a boat moving on the ocean on stage ever created on Broadway that I have seen, as realistic as Holmes and Watson boating on the Thames in The Sign of the Four

After days at sea, with Denham teaching Darrow how to scream, (the whole act rushes forward like an Indiana Jones movie–  the crew mutinies, but plucky Darrow, with Ms. Pitts turbo-charging the vapid Fay Wray character of the movie with courage, spunk and spirit saves Denham’s hide from the angry crew.

This sequence  approach to Skull Island is astounding in its visual realism, its smooth approach to the island. You will not believe your eyes. You’re on a boat

To the haunting anthem Skull Island (composed with a mounting, erie compounding suspense by Marius de Vries) the audience is drawn to the horizon as the words “Land Ho!”  are heard. Soaring rocks appear out of the mist! Then mountains.  The S.S.Wanderer is sailing across tossing waves towards steep soaring shoals ! Could it be? It could be! It is: the mysterious Skull Island!

Kong carries her off to his layer running like an ape pounding through the jungle and he really is visually running with jungle vines rushing by behind him.  It’s alive!

Kong hoists the faint Ms. Pitts and he is running through the jungle to his lair. As Ms. Pitts awakens she pulls her wits together as Kong roars at her. She matches him roar for roar to try and back him off. It is a charming sequence, a real first date. All that’s missing are the Singapore Slings. The facial expressions and puzzlement on Kong’s face are fascinating as the young woman matches him roar for roar.

What’s neat about this “getting to know you” scene is you go it with. You like Kong believe Ms. Pitts’ portrayal, hook, line and sinker. We have to tip the hat to the “Voice of Kong” articulated with shivery  awesome gusto by  Jon Hoche.

Of course, as Kong retires to think about this, you never know, this being a jungle island that time has forgot, what just might slither out of the jungle. Kong saves Darrow from a startling encounter, and using her farm girl “smarts” she convinces him to let her heal his wounds,  singing Full Moon Lullaby.

She takes this opportunity to escape the big guy’s lair, which leads to Kong’s capture by the opportunistic Denham.

On to New York, where Darrow, horrified at Kong’s capture balks at exhibiting Kong for money. Denham’s big song It’s Man cynically says anyone will be a sucker for an incredible show. Darrow is having none of it—and says she will not act in the show which puts Kong on display.

There is a  very funny dance act in which Anything Goes is parodied hilariously.  Denham convinces Darrow by saying she either acts in the show or she’s through in show business. Sounds a lot like today doesn’t it? Darrow laments her choice between Kong and career in Scream for the Money.

Pitts has the gusto soprano that gives her all and delivers the most out song you can get of ambition and regret and gives you the feelings you experience when you compromise your principles, and cannot save someone you care about. Pitts pours this out raw and heartbreaking in her  Last of Our Kind when she sings to the chained King Kong.

What will be his fate?

Christiani Pitts’ heart-throb tribute and tearful lament to Kong, The Wonder has the throng hanging on every plaintive phrase. She and Kong are a Wonder together. Kong sings with his big, sad eyes.

King Kong at The Broadway is a must-see.

Forget about what the old anachronists say, mired in what they think theatre should be, trapped in the past.

This is what theatre  is –creative, courageous, reaching for the stars– creating new experiences, making a fantasy live before your eyes!

Here is a new world– staging, romance, feelings –creating the impossible and you will see it!

You will always remember the night you saw King Kong.

Christiana Pitts and Mr. Kong are Broadway’s most romantic couple.