↓
Home Menu ↓
Home→Supermarket: Dispose of salad mixes, containing Romaine lettuce, even if bought this week. Throw out heads of romaine, clean refrigerators where you stored it. SOURCE: CALIFORNIA 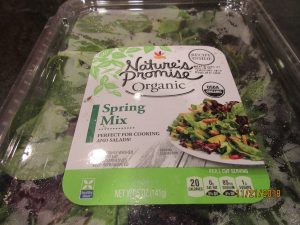 Check salad mixes to see if they contain romaine. 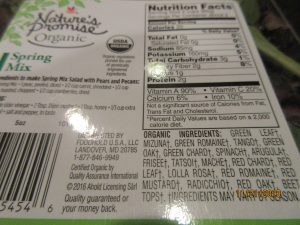 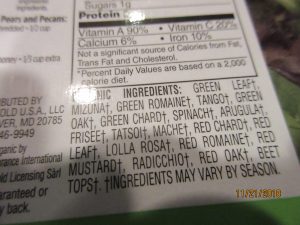 With Center for Disease Control warning to the country to dispose of all salad products containing a mix that includes romaine lettuce, or heads of romaine lettuce, WPCNR checked a salad mix purchased Monday in White Plains.

Sure enough, it contained romaine.

I checked with the supermarket where I purchased it and the official I spoke with said that I should dispose of the mix.

He said there is no way to trace where the romaine lettuce in areas of the country where consumers are getting sick with the e coli virus. “We can’t trace it,” he said, advising the package should be disposed of. This store manager at Stop and Shop in White Plains said, consumers should bring back open or  unopened packages and they will be given a refund. He said under no circumstances should it be served.

The package WPCNR bought was described as washed before packaging, but e coli bacteria are very difficult to remove by washing. The CDC advised that even if the package is triple-bagged that it should not be used, and disposed of.

The Center for Science in the Public Interest, reported that running water over the lettuce can’t ensure that harmful germs are killed. Even scrubbing with baking soda or vinegar won’t clear out the bacteria because they cannot be reached in  tiny crevices you cannot see or wash free. WPCNR points out that in a mix, if there is contaminated romaine, the e coli could have spread to other types of lettuce.

If you have romaine lettuce at home, throw it out, the CDC warned two days previously.Clean your refrigerator where the contaminated lettuce was stored.  Wash your hands.

The Mayo clinic furnishes this information on E coli:

Escherichia coli (E. coli) bacteria normally live in the intestines of healthy people and animals. Most varieties of E. coli are harmless or cause relatively brief diarrhea. But a few particularly nasty strains, such as E. coli O157:H7, can cause severe abdominal cramps, bloody diarrhea and vomiting.

You may be exposed to E. coli from contaminated water or food — especially raw vegetables and undercooked ground beef. Healthy adults usually recover from infection with E. coli O157:H7 within a week, but young children and older adults have a greater risk of developing a life-threatening form of kidney failure called hemolytic uremic syndrome.

Signs and symptoms of E. coli O157:H7 infection typically begin three or four days after exposure to the bacteria, though you may become ill as soon as one day after to more than a week later. Signs and symptoms include:

When to see a doctor

Contact your doctor if your diarrhea is persistent, severe or bloody.