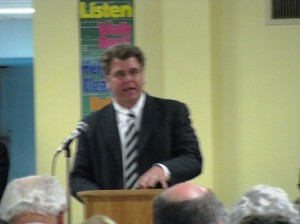 Terence Guerriere, of the Gedney Association has filed petitions containing he hoped enough signatures to qualify him for the Republican line in the November Special Election in White Plains to determine who will serve the final year of former Councilman Benjamin Boykin’s term.

Mr. Boykin was elected to the County Board of Legislators in November, 2013, resulting the appointment of an interim Councilperson (Nadine Hunt-Robinson) in February of this year.

Guerriere told WPCNR Monday he had filed signatures “well above the minimum,” needed to qualify for the November Special Election. He said he now awaited approval of the petition by the Board of Elections.

Anne Marie Encarnarcao a former candidate for Common Council in 2011, had been designated the candidate of the Independence Party in November, but told WPCNR Monday she had not obtained enough signatures on petitions to be able to accept the candidacy and would not be running in November.

Presently, Nadine Hunt-Robinson the Democrat nominee will be opposed by Guerriere (the Republican if his petitions are approved).

However, Richard Cerulli, who ran and lost as a Repubican Candidate for Common Council in 2011 and lost is weigh a run to get on the ballot as an independent candidate, not affiliated with any party.  Cerulli said he was holding a meeting today to decide whether to make a run. As an independent he has until August 19 to submit signatures to get on the November ballot.

Cerulli told WPCNR he is friends with Guerriere, but because Guerriere is opposed to the French American School of New York, and he supports approval of the FASNY project, they have differences there. Asked if he felt his candidacy would split the votes between him and Guerriere should he (Cerulli) get on the November ballot, Cerulli felt he would draw from Hunt-Robinson because of his support for FASNY.